A man survived a crane accident in Maplewood, MN on Monday.

According to police, the accident occurred at the Hmong Alliance Church on McMenemy around noon.

Police say the driver of the crane got trapped and was pulled out and taken to the hospital.

Witnesses apparently helped save the man.

At this point, details on his condition have not been released.

Still Awaiting Details…hard to make out what happened in the pic. Update:Â A 36 year old man has died. 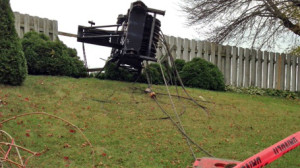