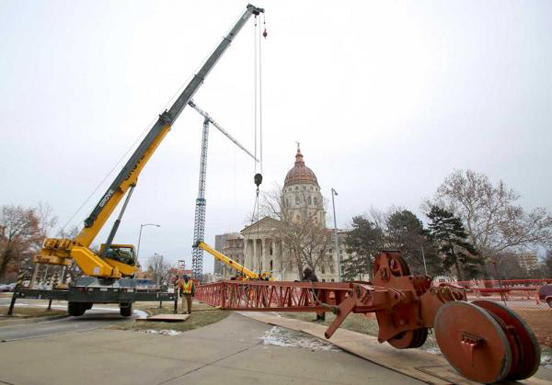 The tallest free-standing tower crane in North America â€” which has been used in the stone restoration at the Statehouse â€” is coming down.

The process to take down the Comansa 21 LC 400 tower crane, which has been a familiar sight in downtown Topeka for the past three years, will begin Friday.

â€œWe are currorently erecting a second crane on site, located on the Statehouse grounds immediately east of 9th and Harrison,â€ said Jim Rinner, vice president of JE Dunn Construction Co., which is leading the renovations. â€œIt is the same one used for the installation of the crane.â€ 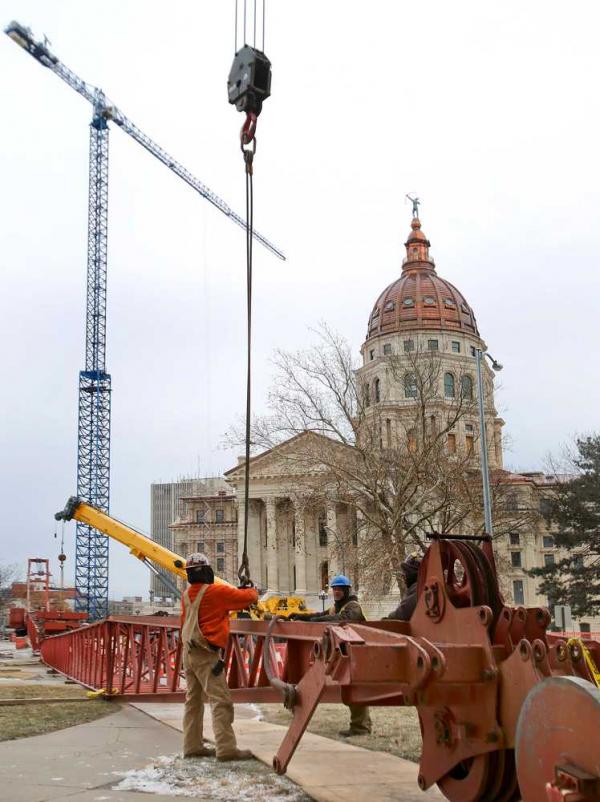 TOWER CRANE
The Comansa 21 LC 400 tower crane needed to reach a height of 360 feet in order for the horizontal boom to pass above the Ad Astra statue on top of the Statehouse dome.
It became operational in September 2010 and will be taken down in sections and sold or stored in JE Dunn Construction Co.â€™s warehouse until it is needed for future construction projects.
While the process of taking the tower crane down will begin as early as 7:30 a.m. Friday, the best time to catch a glimpse of the removal will be Friday afternoon and Saturday.

That crane will remove sections of the free-standing tower crane. On Thursday, S.E. 9th and Harrison was closed to traffic. The boom of the crane almost touched the Docking Building.

Counter weights, equipment from the top of the crane and a horizontal section will come down first, Rinner said. The crane should be completely down within a week.

â€œIâ€™m anxious to get it down,â€ Rinner said. â€œIt was a thrill to be able to put it up because itâ€™s such a mammoth structure. It is time for it to come down and surrender the landscape to the Capitol.â€

Parts of the crane were delivered to Topeka starting in August 2010. It was up and operational by September.

The crane helped complete the stone restoration, which included Dutchman repairs, hand carving, stone stabilization, crack repair, patching, repointing and stone cleaning. The crane, which became operational Sept. 3, allowed stonework and replacements to be lifted into place around the entire perimeter of the dome.

Restoration to the Statehouseâ€™s exterior was completed by workers on scaffolding affixed to the structure, previous Topeka Capital-Journal articles state. The craneâ€™s horizontal boom was used to move heavy equipment and other materials.

JE Dunn began planning for deployment of the crane in 2007.

The company discovered four base sections would be required in addition to the five it already had. JE Dunn began to find sections large enough for the Topeka job, and the extra sections were shipped here from Spain.

Statehouse renovations â€œwill be 99 percent finished by Jan. 2,â€ said Statehouse architect Barry Greis. There will be some landscaping to do in the spring, and work on the ceremonial driveway around the Capitol will be finished when the weather warms up.

The renovation began in December 2001 and has updated water, electrical, heating, air conditioning and fire safety systems, according to a November Associated Press article. Legislators have better, roomier offices and meeting rooms that are more accommodating to spectators. The state built an underground parking garage and expanded the basement, adding 128,000 square feet of space.

â€œThe crane is the major symbol of what work was done,â€ Greis said. â€œBut it also symbolizes the completion.â€

The total cost of the renovation was projected to be $332 million.

â€œWe still plan to be under that by several million dollars,â€ Greis said.

There have been ups and downs during the renovation process.

The new visitorâ€™s center and renovated Statehouse will open to the public Jan. 2.

â€œI think Kansans and all of the visitors will be extremely happy with this building,â€ Greis said. â€œThese were the paint colors and stencils the forefathers decided on in the 1860s, 1870s and 1880s. I think visitors will be amazed about what had previously been decided.â€ 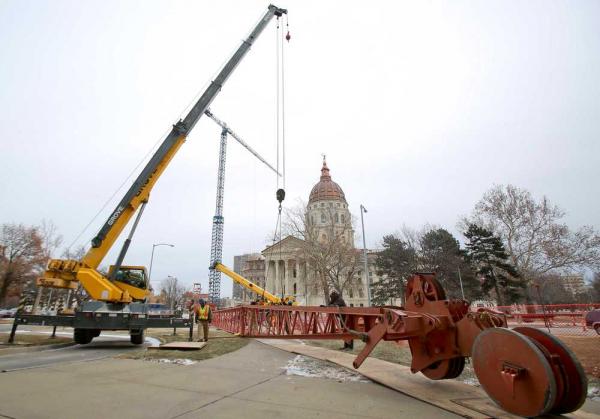 Construction crews battle through the cold Thursday afternoon to attach cables to a crane that will take apart the tower crane at the Statehouse. The tower crane is scheduled to be taken down on Friday. The crane has been operational since September 2010.