A crane which fell 80ft and narrowly missed a primary school two days before Christmas has cost a company nearly Â£100,000 in fines and costs.

Although no one was injured, 40 residents living near to the development in South Road, Saffron Walden, had to be evacuated overnight on December 23, 2011, after the hook block, weighing up to a quarter of a tonne, on the jib end swung out and smashed through a garage 45m away.

McCarthy & Stone Retirement Lifestyles Ltd was building 27 apartments on the site of the former Bell Language School when the crane jib collapsed at 4.30pm because bolts had not been tightened enough.

McCarthy & Stone, from Bournemouth, who had pleaded guilty to two Health and Safety at Work breaches at an earlier hearing, were fined a total of Â£50,000 and ordered it to pay the Health and Safety Executiveâ€™s costs of Â£47,681 on Friday at Chelmsford Crown Court. 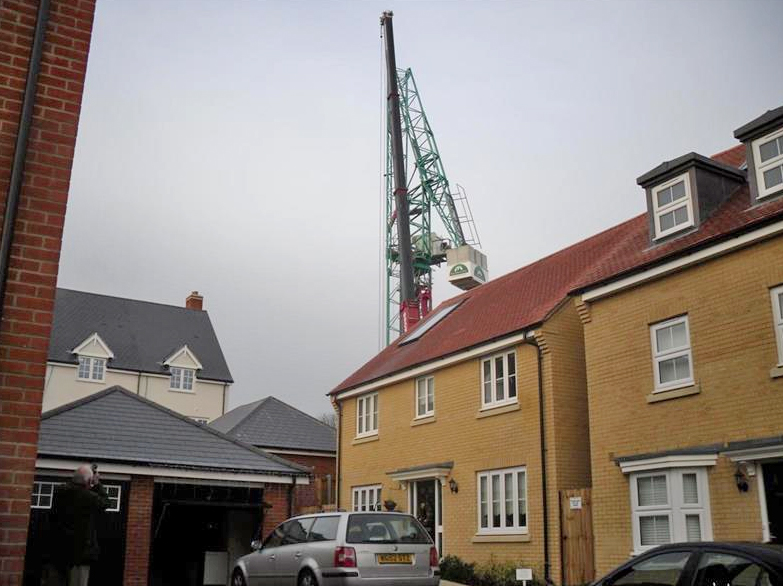 The building site was closed at the time because of the festive holiday, but properties were evacuated by police and firemen because of the danger of equipment falling in the dark.

Residents were allowed back in their homes by Christmas Eve evening.

Judge Anthony Goldstaub QC said if anyone had been in the area â€œthere would have been a great risk, not just to their health and safety, but to life and serious limb damage.â€

The court heard that on December 15 during testing a hoist rope on the crane broke which caused the jib to whip upwards â€œlike a fishing line being castâ€.

Only a visual inspection was carried out and the bolts connecting separate parts of the jib were tightened using a conventional handheld spanner and not one with a torque measure.

If a torque device had been used, that would have meant the joint could withstand stresses, including wind force, the judge added.

The court heard that a failure to use the torque measuring mechanism did contribute to the craneâ€™s collapse on December 23.

He said the company had an â€œimpeccableâ€ health and safety record over its 40 years other than this incident and had taken all steps to prevent a repeat.

That included an instruction to automatically replace all lifting ropes after two years, or sooner.
Read more:Â http://www.cambridge-news.co.uk/Saffron-Walden/Developer-to-pay-nearly-100000-after-admitting-failure-in-a-crane-collapse-in-Saffron-Walden-20131209142636.htm#ixzz2mzWg83Ry

Developer to pay nearly Â£100,000 after admitting failure in a crane collapse in Saffron Walden was last modified: December 9th, 2013 by Ron Selby