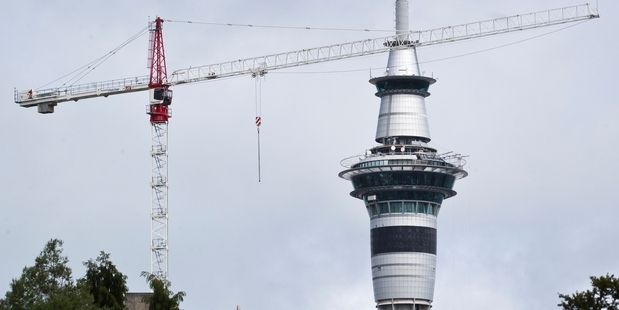 Fletcher said the first of two Liebherr, litronic, hammer head tower cranes was up at the city campus on the corner of Wellesley St and Princes St.

“It was erected with a 450-tonne mobile crane, one of the largest mobile cranes in New Zealand, between October 18 and 20,” the company said.

The crane needed a huge mobile crane to erect it. Photo / Greg Bowker

“When the tower crane went up, three lanes of Wellesley St were closed just to lay out the boom and set up two temporary mobile cranes to lift it into place.”

The top of the crane is 87m above street level and it can lift loads up to 65m away.

The tower crane is on a 1.6m thick concrete pad and four concrete piles, each 13m long with a 900mm diameter.

The second tower crane is due to go up in April or May and will be 72m high with a 45m boom.