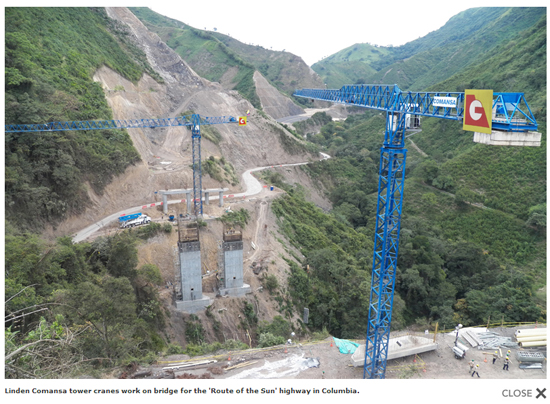 Six Linden Comansa tower cranes have been put to work on a 1,071km road in Columbia. The highway, known as the â€˜Route of the Sunâ€™, will stretch from midland cities, such as the countryâ€™s capital Bogota, to the major Caribbean port of Barranquilla.

Helios Consortium â€“ a joint venture between CAS, IECSA, ConConcreto and CSS Constructores â€“ has been selected to manage and build Sector 1 of the road. Despite being the shortest of the three sections that will comprise the final highway, Sector 1 is the most complex. 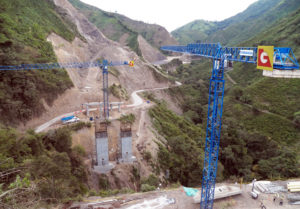 Linden Comansa tower cranes work on bridge for the ‘Route of the Sun’ highway in Columbia.

This stretch of the road will cross the Columbian portion of the Andes mountain range. As this area contains numerous rivers and gorges, the 78km sector will feature almost 3km of tunnels and up to 6km of bridges and viaducts.

Helios Consortium has enlisted the help of six Linden Comansa tower cranes that will be operated by Gigacon: the Spanish manufacturerâ€™s official distributor in Columbia. One 21 LC 400 18t crane, two 21 LC 210 18t cranes, a pair of 10 LC 140 8t cranes, and one LC 5211 5t crane, will comprise the line-up.

The Spanish machines will be responsible for the construction of seven bridges on Sector 1. Once they have finished working on one bridge, the cranes will be disassembled, transported and re-erected at the next. To keep pace with the demanding work schedule, it will be necessary for some of the cranes to work double shifts.

â€œOne of the biggest difficulties we faced was transportation to the rural area of the Magdalena Medio, which is crossed by Sector 1 of the Route of the Sun,â€ explained Gigaconâ€™s Fabio CaÃ±Ã³n. â€œIt is a rather rugged and unpopulated area, 100km away from Bogota, and the current road doesnâ€™t precisely meet the best conditions.â€

The lightweight nature of the tower cranesâ€™ sections, however, enabled the team to erect and disassemble the machines within relatively small timeframes, according to CaÃ±Ã³n. Due to the remote locations involved in this project, Gigacon has established a permanent maintenance team to accompany the cranes.

At present, it takes approximately 18 hours to drive from Bogota to Barranquilla. Once completed, the Route of the Sun will allow commuters to complete this journey in just 10 hours.