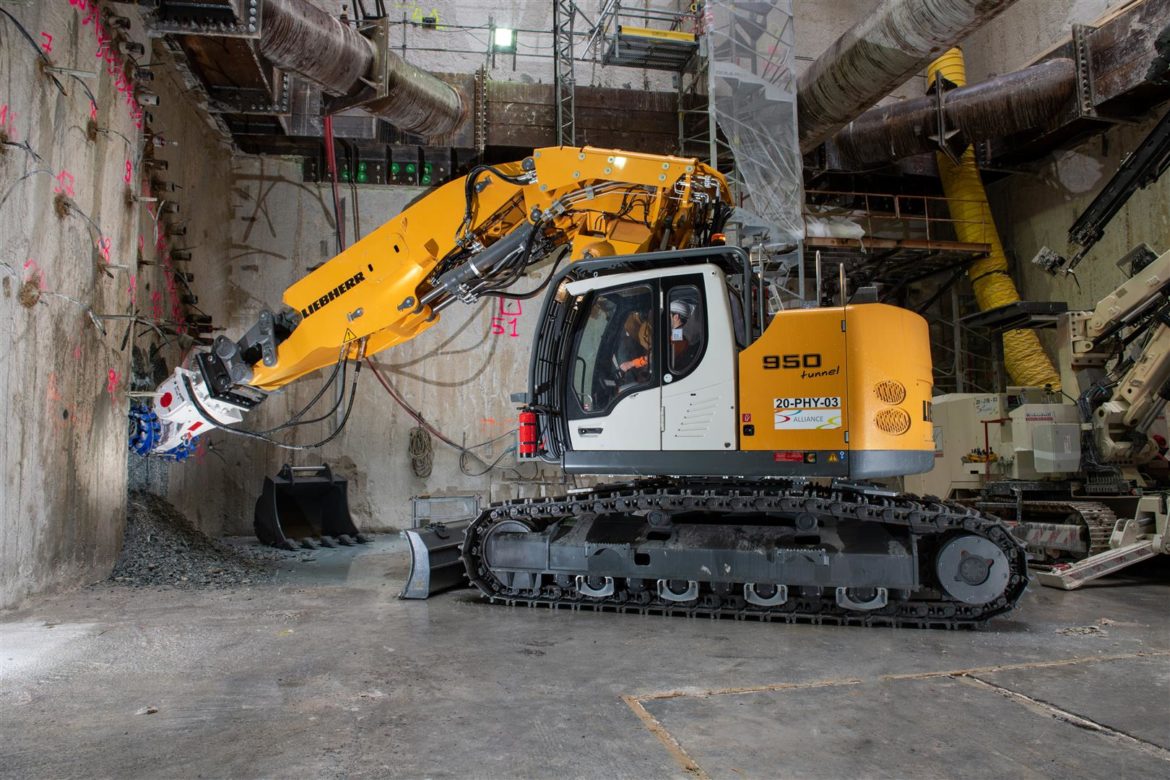 Villiers-sur-Marne (France), 30. October 2019 – A Liebherr R 950 Tunnel crawler excavator is being used on one of the Grand Paris Express construction sites. In this huge project, the Liebherr R 950 Tunnel crawler excavator in shaft 807 of Line 15 is responsible for milling, creating arches and some handling operations. The Alliance Group is fully satisfied with the machine, which has an operating weight of 45 metric tonnes.

The R 950 Tunnel crawler excavator, which has clocked up more than 500 operating hours since the start of construction, was selected for its compactness, ergonomics and the expertise of its manufacturer: Liebherr-France SAS. Liebherr-France SAS is one of the major players in tunnel excavator development and production. The R 950 Tunnel crawler excavator is mainly used with an Erkat ER 2000-2 milling cutter from Witeck and an arch gripper from ONE-TP.

The Alliance Group, which is responsible for the construction site, is extremely satisfied with the machine in use. The excavator features tunnel equipment, which ensures optimum alignment of the milling machine and is also equipped with a powerful engine and a hydraulic system for the milling cutter. The small swivelling radius increases the machine’s usefulness where space is restricted and thereby provides greater working flexibility.

Work at the construction site began directly in the shaft and since the bridge crane on site was only designed to lift a maximum of 30 metric tonnes, the Liebherr crawler excavator had to be dismantled in order to get it underground.

The R 950 Tunnel: a machine suitable for underground construction sites

A construction site below ground requires the use of machines that can work under very specific conditions: narrow and limited space, large volumes of material on the construction site and dust are factors that make work difficult.

The R 950 Tunnel crawler excavator has an operating weight of approximately 45 metric tonnes. The Liebherr diesel engine achieves an output of 190 kW / 258 HP. This machine is suitable for a tunnel height of five to eight metres. At 14 l/h on this construction site, the R 950 Tunnel has a low average fuel consumption for this model.

The Grand Paris Express is currently the largest urban development project in Europe. With the aim of expanding and connecting the Parisian metropolis, 200 km of automated railway lines and 68 stations are being built for the Grand Paris Express project. In addition to developing the infrastructure, the project is designed to promote the economic and social development of the Paris region.