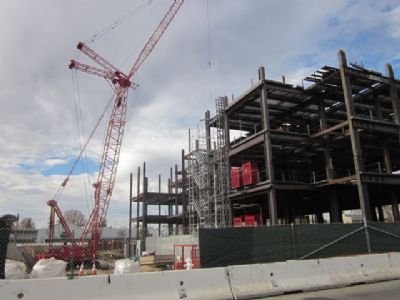 The month of December, 2013, has been an amazing site to watch the total transformation of Main [between] Fifth and Sixth Streets, Woodland, California â€“ from a block of under-used buildings a year ago, to a massive hole in the ground and now today with tons of steel stacked to form the new Yolo County Superior Courthouse.

My early professional life was in the electrical construction of large, similar-type buildings, which brought back old memories for me. I would like to give my perspective of what I have witnessed this last month.

Some of the construction methods have changed somewhat, but all in all, itâ€™s the hard work of all the individuals working together to make it happen. This massive steel structure is impressive for Woodland which Iâ€™m sure is just a small project to the contractors and workers.

The erection of the hundreds of sections of steel was performed by California Erectors, from Benicia, California, in a very efficient manner. Gayle Manufacturing Company of Woodland, lead by Jim DeBlasio and Dave DeBlasio, provided all of the pieces of steel to fit together like a glove is nothing short of amazing. Iâ€™m sure Gayle Manufacturing management and employees have been working on this project for most of this last year in the Woodland plant. Gayle Manufacturing Company is noted as one of the premiere steel building fabricators in the nation. We should be very proud to have this high-quality company located in Woodland.

As I saw the coordination of all the moving parts, it was flawless, from delivery to assembly of the enormous crane. The numerous truck loads of steel beams, all beams marked and ready to swing into place with no delays. The crane operator was always on the move for efficiency of time. The swinging of up to four beams at one time eliminated a lot of swing time. I timed many of the pick and sets and found the best time was four minutes. That was pick up from delivery truck (four beams), swing to building, put in place, bolting beams together and swinging back to truck, which amazed me.

The highlight was to watch the two steel setters (names unknown) from California Erectors place each beam in place with such ease and grace. This is as they are walking and balancing on a twelve-inch beam five floors above ground with only a safety cable attached… great job fellows!

I, personally, would like to congratulate all the architects, engineers, management and employees from Hensel Phelp Construction, Maxim Crane Works, California Erectors and Gayle Manufacturing Company for this beautiful addition to Woodland.