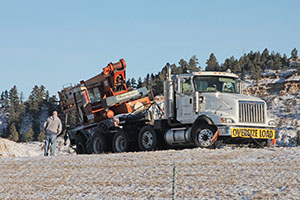 SPEARFISH â€” A chain securing a crane to a flat bed trailer broke as the driver of the semi truck pulling the trailer rounded a bend causing the crane to partially slip off the trailer.

The incident forced the closure of Interstate 90â€™s Exit 12 eastbound onramp for about five hours.

A larger crane, from B&B Crane Service in Rapid City, was called in to lift the smaller crane back onto the flatbed trailer.

Fenolio was cited for having an unsecured load. There were no injuries.