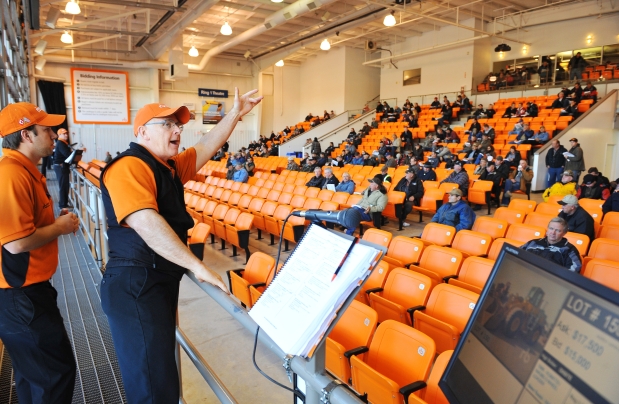 The heavy equipment auction house has established a U.S. presence the past 14 years and is just now bidding for some attention in Western Canada, where Ritchie Bros., the worldâ€™s largest industrial auctioneer, has dominated the sector for decades. IronPlanetâ€™s executives are nevertheless selling the message to buyers, sellers and media that their Internet-based business model will win the hearts, minds, dollars and heavy equipment of Canadians.

Al Bradley tries to coax higher prices from the bidders on Wheel loaders at an auction sale at Ritchie Brothers going on over two days, Tuesday and Wednesday. Itâ€™s expected to raise $90 million, mostly from construction equipment.
Photograph by: Shaughn Butts , Edmonton Journal

â€œTheir model is around a physical event. The frequency is six to seven times a year. Our events are every week. We have upwards of 15,000 people attend our weekly auctions every Thursday. So thatâ€™s the differentiator.

â€œWhat weâ€™re seeing is, time is a commodity now. People donâ€™t have time to travel to look at things. I often think itâ€™s funny because the computer age was supposed to free up our time when itâ€™s actually made it busier for us. Having said that, I think this allows people to not have to travel to attend the auction for just the time they need to bid on the item that theyâ€™re interested in.â€

But theyâ€™re a 14-year-old David and Ritchie Bros., a public company founded in 1958, is a formidable Goliath, so IronPlanet might need a bigger slingshot. IronPlanet says it has sold more than $3 billion worth of equipment in its history, while Ritchie Bros. had sales of more than $1 billion in Canada alone in 2012 and $987 million in the first three quarters of 2013.

â€œTheyâ€™re certainly in our space,â€ said Kevin Tink, senior vice-president of Ritchie Bros., which held 58 unreserved auctions in 15 countries in the third quarter of this year. â€œThere are lots of competitors. No one has the same reach or customer base that we do. IronPlanet is strictly online. Thatâ€™s not our world.â€

Ritchie Bros. flexed its corporate muscle again last month, when a two-day sale held at their Nisku yard drummed up record numbers for them â€” $95 million in sales on about 5,850 lots. The hybrid on-site and online auction attracted more than 6,450 bidders from 58 countries. About 3,600 online bidders accounted for $35 million in sales.

â€œUsually our October auction is our second biggest sale next to our three-day April auction, but itâ€™s never been this big before,â€ said Jim Rotlisberger, regional sales manager for Ritchie Bros. â€œTo sell more than 5,850 equipment items and trucks in two days is unheard of.

â€œAt this time of year, many contractors are changing gears; selling off equipment used in the summer and getting new gear for the winter season.â€

The attraction for many of its customers is the fact that the graders, excavators and trucks are on-site.

â€œWe have the assets marshalled to our yard,â€ Tink said. â€œCustomers can come to our yard and inspect literally thousands of assets at a time. As a buyer, weâ€™re all most comfortable is we can touch it, feel it, look at it. It creates the most amount of confidence for the buyer.â€

As one might expect, IronPlanet has an answer for that.

â€œWe have what we call ironclad assurance,â€ McGregor said. â€œThis is our inspection.

â€œTake upwards of 100 photographs. Test functionality of each component of the piece of equipment. Pull fluid samples, analyze them. And we post that inspection report on the website and we guarantee its accuracy.

â€œIf we missed something in the inspection or misrepresented something, weâ€™ll make it right.â€

IronPlanet runs its inspectors out of a Fort Worth, Tex. office while its corporate headquarters are in Pleasanton, Calif., it has a sales office in Atlanta and established a European office in Dublin four years ago. The company boasts about 300 employees worldwide. McGregor said its commission structure is similar to that of Ritchie Bros., but she declined to provide specifics as IronPlanet is a private company.