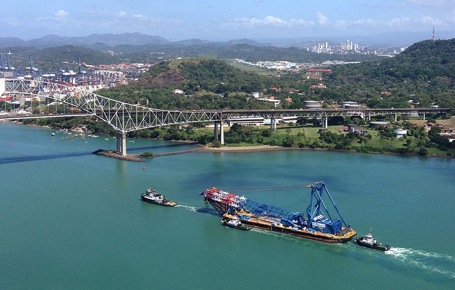 Once on site in the Hudson River, the floating crane, formally named the â€œLeft Coast Lifterâ€ but now dubbed I Lift NY for its work in New York, will assist Tappan Zee Constructors, LLC (TZC) in the construction of the Tappan Zee Bridge replacement. With a boom length of 328 feet and a 1,900-ton lift capacity, the I Lift NY super crane will allow TZC to construct the new bridge and demolish the exiting bridge safely and more efficiently.

â€œNew York has one of the worldâ€™s biggest floating cranes helping to build the stateâ€™s most ambitious infrastructure project of the 21st century,â€ said Governor Andrew M. Cuomo. â€œThe I Lift NY super crane can lift the equivalent of up to 12 Statues of Liberty at once, shortening construction time by months and reducing project costs by millions of dollars.â€

The extraordinary lifting capability of I Lift NY will enable TZC to construct giant modular sections of the new bridge at an assembly yard along the Hudson. These sections, weighing 900 to 1,100 tons, will then be brought to the construction site by barge and installed by the I Lift NY super crane.

The I Lift NY super crane began its transit of the Panama Canal today and is continuing its 6,000-mile journey to the site of the New NY Bridge project.

I Lift NY will also be used to dismantle the existing bridge. The craneâ€™s capacity will allow the 60-year-old structure to be disassembled in larger pieces, saving both money and time.

Escorted by tug boats, the I Lift NY super crane departed from Oakland, California on Dec. 22. Traveling about 50 miles off the coast, the floating crane and its accompanying tugs headed south along California, Mexico and Central America, before beginning transit through the Panama Canal on Jan. 15.

I Lift NY is built on a 384-foot barge, and has no navigational power of its own. The lifting power for the giant floating crane comes from three diesel-powered 601 kW (806 hp) main generators and one 91 kW (122 hp) auxiliary generator, which are incorporated into the barge.

To make the trip from California to New York, a specially-designed boom support was fabricated, attached to, and extending some 86 feet beyond the stern of the barge, thereby allowing the boom to be lowered to its transit position. Certain components were wrapped with a heavy poly material to protect them from salt spray during the voyage. A temporary electrical generation system was installed so that power to key pieces of equipment could be maintained during the journey, and to power dehumidifiers added to keep certain rooms and compartments dry.

To protect I Lift NY as it transits the Panama Canal, â€˜rub railsâ€™ were installed along the side of the crane to avoid contact with the canal lock walls.

The I Lift NY super crane is owned by TCZ and was christened the Left Coast Lifter for its role in a major bridge construction project in the San Francisco Bay area. It is expected to arrive in New York Harbor at the end of the January, and will be brought to the New NY Bridge project site in the coming months.

For photos and video of the I Lift NY super craneâ€™s transit through the Panama Canal, clickÂ here.