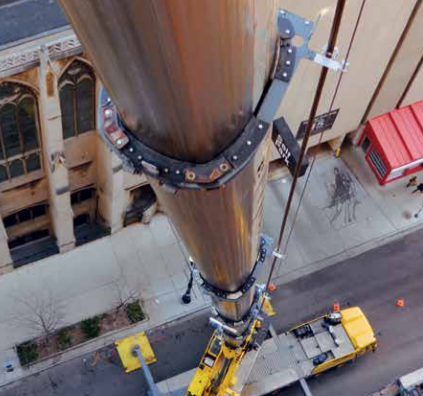 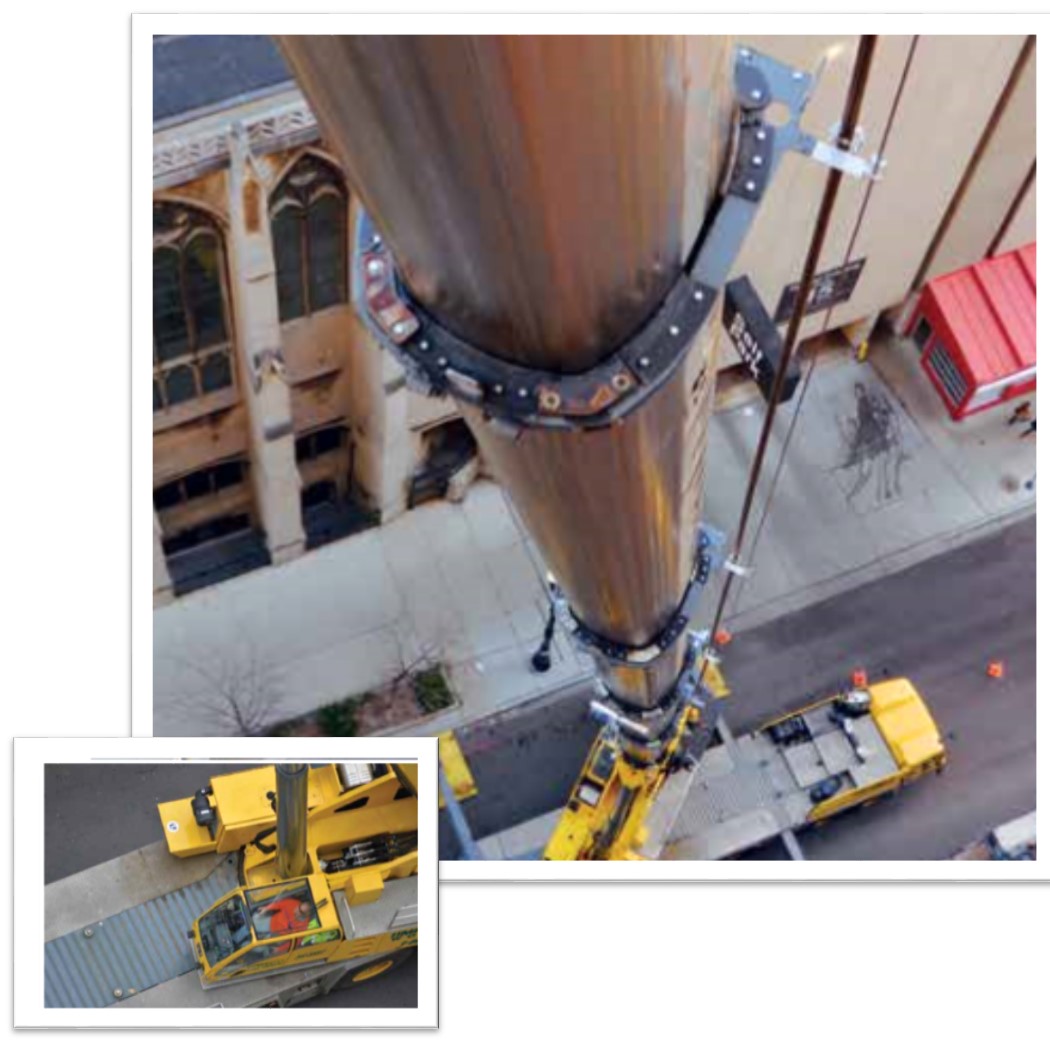 Chicago-based Imperial Crane & Rigging often wins jobs based on adept lift planning, crane selection and its “thinking outside the box” mentality. A case in point was a recent HVAC replacement job on the campus of Loyola University. The scope of the project was to remove and replace a chiller unit from the
roof of the 13-story Loyola Center Tower that is located on Pearson Street, which is right off Michigan Avenue and just down from Water Tower Place.

The old HVAC unit weighed 15,000 pounds and its replacement weighed 14,000 pounds. The unit needed to be placed about 35 feet beyond the roof line. Pearson Street would need to be shut down for the set up of the crane, for the lift and for the disassembly of the crane. Depending on the size of the crane chosen for the project, the shut-down time would range from 12 to 24 hours. Really tight fit Imperial Crane’s Senior Project Manager Jeff Hejna looked at the job site from every angle to determine the quickest, safest and most economical way to perform the lifts. Using 3D Lift Plan software, he chose a Grove GMK 6300L as the centerpiece crane. 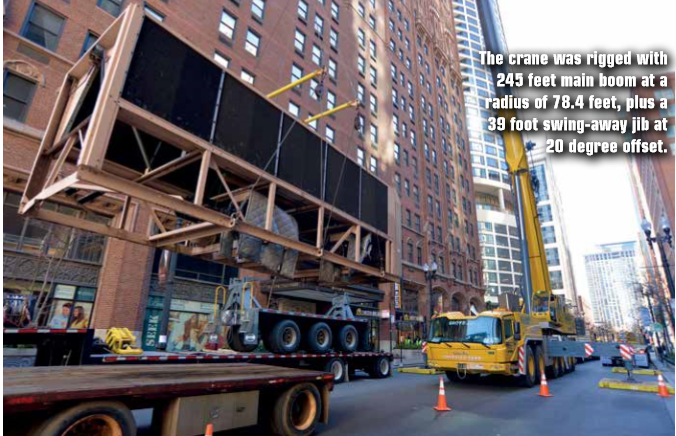 Using this particular crane had its challenges, mainly space constraints, but utilizing this model crane would save a lot of time and money. “We literally had a five-foot cushion to the east and a five-foot cushion to the west,” said Hejna. “If we were set up five feet further to thewest we would not have had the room to set up the crane, and if we were five feet further to the east we would have had to block and close a major parking garage. This job required us to thread the needle. We had a five-foot margin of error.” But after doing all the calculations and assessing every element of the lifts, Hejna was convinced this was the best scenario. “We could have used a larger crane,” said Hejna. “If we had used a 500-ton crane with a full luffing jib we would have had to block off the street from Rush Street to Michigan Avenue. The cost would have been a great deal larger. The parking garage would have had to be shut down for a full day. In this scenario, it would have taken 12 hours to build the crane, eight hours to perform the lifts and 12 more hours to break down and move the crane.” The GMK 6300L was the perfect solution because of its short set up and tear-down time. “From start to finish, set up, picking and tear-down was 11 hours,” said Hejna. “We did it all on a Sunday and we were gone before our allotted 12 hours was up. The crane was rigged with 245 feet of main boom at a radius of 78.4 feet, plus a 39 foot swing-away jib at 20 degree offset. It was rigged with its full counterweight of 220,000 pounds, and fully rigged the crane was set up at 38 feet wide including the outrigger mats set up on a 40-foot wide street. “It was critical thatthe crane was in the exact position,” said Hejna. “The lift plan was an important element and we walked the job twice to make sure all the measurements were correct and that all the clearances and safety factors were met. Setting up the crane was increasingly challenging as the operator had to swing the jib in such a small area. Getting the permission to close the street for 12 hours was another hurdle and required the approval of the Chicago city alderman. “That was quite an undertaking getting permission to close the street,” he said. The day of the lift was perfect, about 30 degrees F and 8 mph winds. Wind conditions are always a concern in Chicago, especially for a job like this one that required lifting the HVAC unit to a height of 214 feet. One shot As the cold Sunday morning dawned, the crane was already onsite as it had performed a couple of smaller lifts on the Loyola campus the day before. Due to noise restrictions, Imperial crews were not allowed to start building the crane until 8 a.m., and they would need to have it broken down & off the street by 8 p.m.

“We rolled into place right about 8 a.m.,” said Hejna. “We started the first lift to hoist the old unit down about 10:30 a.m.” Imperial had a crew of four on the job and there were four workers from the rigging company hired to rig the HVAC unit to the crane. The rigging company supplied the spreader bars and below-the hook gear. All total, six picks were made. Two other units were lifted to the roof as well. Hejna was extremely pleased with the project. “Everything went better than expected,” he said. “It was a tight fit. Normally we have a couple different options for making the pick, such as moving the crane a bit or lengthening the rigging. But with this job we had one shot. The crane had to be where it was to make the lift, and it had to be this crane. 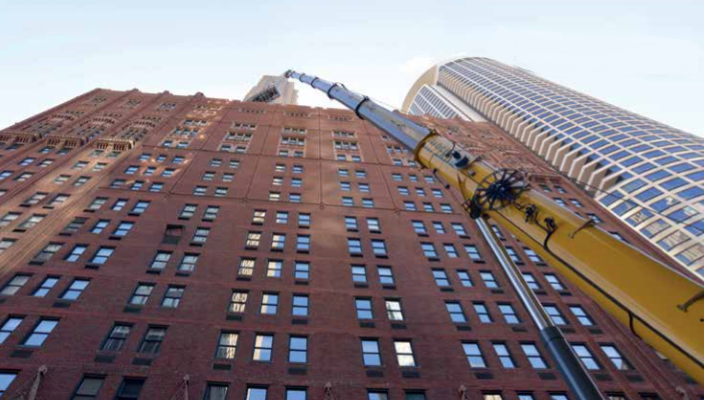 No other 350-ton crane would work because there wouldn’t be enough boom length. It was one of those things when world’s collide and everything falls into place.” Using a larger crane would have required 24-hour street closure, parking garage closure and the expense of an assist crane. “We were

able to save the customer a great deal of money by doing the lift this way,” said Hejna. “The cost for using the larger crane would be $100,000-plus or higher depending on the setup. We ran it a ton of different ways and realized we could make the pick safely and efficiently. When this job was complete, it was definitely one of those high five moments.”