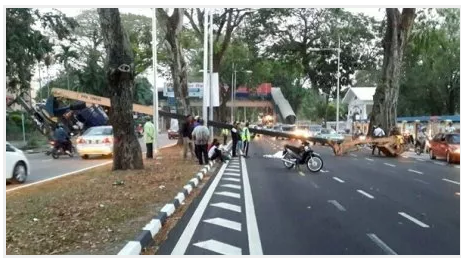 GEORGE TOWN:Â A fallen crane and a fatal accident near the Penang Free School at Jalan Masjid Negeri caused a massive gridlock towards town earlier this morning.

In the 3.30am incident, the crane, which was on site to repair street lamps, had lost its balance, with its boom hanging precariously across the median, rendering the rightmost lane, causing a bottleneck right before Jalan Cheeseman.

Later at 6.30am, a 50-year-old woman on a motorcycle heading towards Gelugor crashed on to the counterweights of the machine, and died on the spot.

The deceased, Che Fatimah Ishak from Kampung Baru, Air Itam, was brought to the Penang Hospital for a post-mortem.