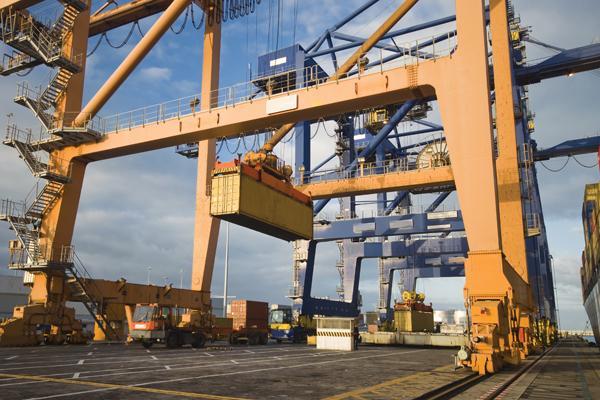 An engineer caught in winding gear of a container crane 30m above the ground at Tilbury Docks had to endure a six-hour wait before specialist orthopaedic surgeons could set him free.

Emergency services were called to Tilbury Docks on Monday to rescue the engineer, who does not want to be named, who had trapped his leg in the winding gear of the 100ft quayside crane.

Firefighters first on the scene had to administer emergency first aid while specialist orthopaedic surgeons from Addenbrookes Hospital in Cambridge, were flown to the scene.

Specialist crane equipment that loosened the tension on the gears of the crane was used in the rescue operation. The orthopaedic specialists, Peter Hull and Andrew Carrothers from the regional trauma centre at Addenbrooke’s, were on the scene for six hours before the man was finally released. A vascular surgeon was also brought in from Broomfield Hospital in Chelmsford.

The man was finally airlifted to Addenbrooke’s Hospital in Cambridge, where his condition is described as stable.

Addenbrooke’s Hospitalâ€™s clinical director Rod MacKenzie told the BBC he had not seen a case like it in 20 years.

A crane worker was killed at Tilbury Docks in 2011 after an eight-wheeled straddle carrier crane toppled onto its side and threw him from the cab.

The inquest into the death of 45 year-old Ian Campbell earlier this month found he had died as a result of an accident.

The inquest heard there were potholes up to 40ft wide at the docks.Â A faulty stability alarm in one of the machines had also been reported, but nothing had been done about it, operator John Horsfall told the hearing.

The jury also heard from cargo operator, Bradley Pritchard, a qualified crane instructor, who said he had reported concerns about the stability alarm to the control team at Tilbury Docks Ltd. He also said if health and safety issues were brought up “nothing ever gets done”.

Tilbury took delivery of 14 new straddle carriers in May as part of a Â£20m investment programme at the port’s London Container Terminal.

Forth Ports recently appointed Janice McCann as group head of health and safety.Â Speaking on her appointment, Charles Hammond, chief executive of Forth Ports, said: â€œHealth and safety is of paramount importance to our business and we invest heavily in training and developing safe operational practices throughout the business.â€