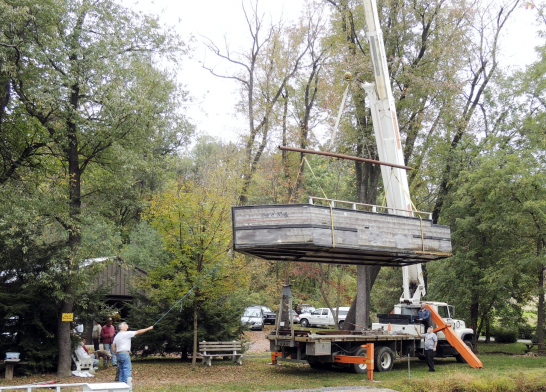 With its boats not in compliance with state regulations, Union Canal Tunnel Park’s annual Halloween Scare Affair has been canceled.

The Friends of the Union Canal Tunnel Park, the volunteer organization that runs Scare Affair, decided to cancel the event because there are too many unknowns with the barges, said president Phil Feather.

“We’re looking at repairing both boats, one boat or buying a new boat,” Feather said. “We knew we wouldn’t have time to get anything done before the Scare Affair. It’s a real disappointment to the community. We have a lot of people that are upset that we canceled it.”

The park has two barges that it uses to give rides, the Earl P. Leiby and the Lois H. Meily. The Leiby is named for a late former Lebanon County Historical Society president, while the Meily is named for a former president of the Friends group. 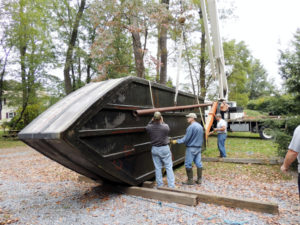 The Lois H. Meily, one of the Union Canal Tunnel Park s two barges, is turned on its side after being lifted out of the water on Wednesday. (brad rhen Lebanon Daily News)

The boats have been off limits for rides since July 5 after the state Fish and Boat Commission notified park administrators the boats and their pilots were not in compliance with state regulations because they were not licensed.

Later in July, the boats were inspected by a marine surveyor, who determined they both needed repairs.

“One of the boats we’re going to put into our maintenance shed and work on it over the winter,” he said. “If our consultant doesn’t think repairing it will be worth the money, then we’ll be looking for someone to design a new boat. All this is up in the air. It’s a matter of cost.”

Both boats were pulled out of the water Wednesday with the help of a crane from Bamberger’s Crane Service of Lebanon. Longtime park volunteer Jim Schucker, who was on hand to watch, said the boats are taken out of the water at the end of October each year.