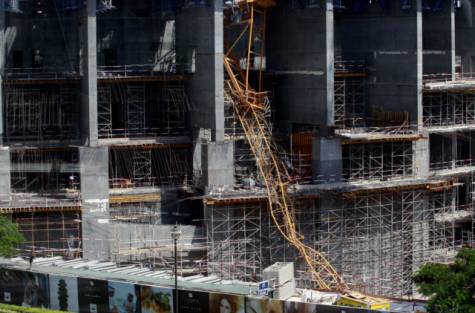 At around 7pm on Saturday, the crane he was working on came crashing down, killing three of his colleagues and injuring five others, including him.

The crane that was being used to lift building material at a construction site crushed Robertoâ€™s right leg. â€œIt could have been worse,â€ the 41-year-old said.

Police said the operator lost control of the crane. The operator and some staff of Brookefield Multiplex (BM) â€” the company building Emaarâ€™s The Address The BLVD hotel and serviced apartments tower in Downtown Dubai â€” are in custody and being questioned about the incident.

Robertoâ€™s account offers a glimpse of the moments before the fatal crash. â€œWe had raised the crane by four metres since the morning before the incident,â€ Roberto told XPRESS from his bed in Rashid Hospital where he underwent a surgery on Sunday to restore his broken leg. 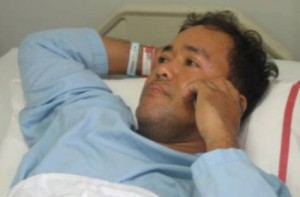 Roberto, who joined the company two years ago, said the craneâ€™s motor mechanic who lost his life after being pinned down by the five-tonne lifter was known to him. â€œAt the time of the accident, most of the workers had already left for the day. We work on eight hour shifts, with a few hours overtime when needed. It could have been worse if the accident had happened during the day, when more workers are around,â€ he said.

BM has confirmed that the incident happened while workers were climbing the crane and said investigations are underway.

Emaar Properties launched The Address The BLVD project in September 2012. The 63-storey tower is scheduled for completion in early to mid-2015 and will have 200 hotel rooms and 542 serviced apartments.

Roberto said that at the time of the accident the team had been raising the crane. He said he was not sure what led to the collapse.

â€œThe crane was on standby and was steady. We were under the crane inside the mast section, when the incident happened. Our team had several members. The crane operator was sitting on top and the crane was not moving. All of a sudden, I saw part of the crane coming down on us. We scampered for cover, but there was no time,â€ he recalled.

Cranes are raised up as more floors are added to a high-rise building during the construction stage. â€œIâ€™m thankful I survived,â€ the father of three said. â€œMy family, wife and children still need me,â€ he said.

Roberto, from Batangas province in the Philippines, has been working with cranes for over 10 years and he has not come across any major incidents during that period. â€œIâ€™ve never seen such an accident before,â€ he said.

Roberto blacked out after a portion of the crane hit him. â€œI was unconsciousness. I only came to my senses after emergency staff attended to us.â€

By 8pm, he was already in Rashid Hospital. And at 1am on Sunday, he was wheeled into the operating room where surgeons worked for four hours to fix his broken right leg with a metallic brace. â€œAfter the anaesthesia wore off after the operation, I couldnâ€™t sleep the entire night. I thank God as all I suffered was a broken leg. I was happy as doctors told me I will be able to walk and work again. But I am extremely sad for my colleagues who lost their lives in the incident,â€ he said.

Roberto said he hasnâ€™t informed anyone in his family about the crash as they would worry unnecessarily. â€œI will tell them after some time.â€

The other victim, Ramil Lopez, 32, from Capiz in the Philippines, fractured his nose, lost four teeth and had to undergo an elbow surgery. Lopez, who has been working with cranes for seven years, is being treated by a maxillofacial specialist.

â€œI lost complete consciousness and came to my senses only in the ambulance,â€ said Lopez.

â€œI thank God and the emergency workers he sent to attend to us. This is a second lease of life for me.â€