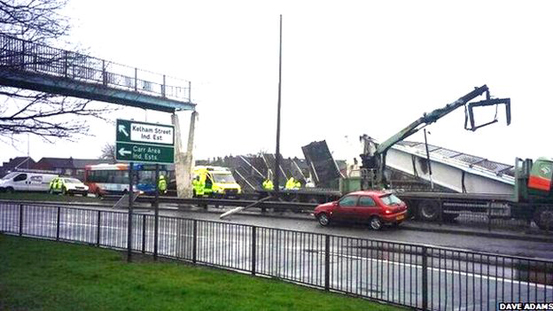 A footbridge over a main road was destroyed by an upright crane on the back of a lorry, a South Yorkshire council has said.

The pedestrian footbridge over Cleveland Street in Doncaster (A630) collapsed on to the road after being hit at 10:40 GMT.

Doncaster Council said the bridge was not in use when the accident happened.

The footbridge crosses the A630 near St. James Street flats.

The lorry driver was taken to Doncaster Royal Infirmary where he was treated for minor injuries, South Yorkshire Police said.

No one else was hurt in the incident.

“It’s a busy route but luckily it wasn’t as busy as at other times when the accident happened,” a council spokesman said.

“It’s fortunate that no one was on or under the bridge.”

Cleveland Street is expected to be closed until at least the end of the day.

Doncaster Council said the whole bridge was being removed by council workers.

It had already been closed to the public while its future was decided and the closure had nothing to do with the accident, the council said. 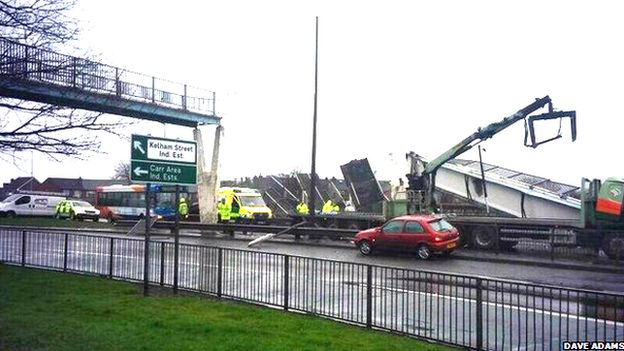 A crane hit the footbridge over the A630 at Cleveland Street in Doncaster, causing the bridge to collapse

Doncaster footbridge collapses after being hit by crane on lorry was last modified: February 13th, 2014 by Ron Selby