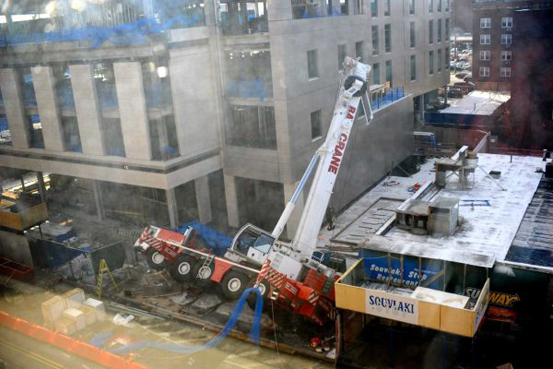 Emergency responders are at the scene of a crane collapse Wednesday at the construction site for a new research building at Winthrop-University Hospital in Mineola, police said.

Nassau County police said there were no serious injuries reported in the collapse, which occurred about 12:30 p.m. at the site along Mineola Boulevard and First Street. It was not immediately clear whether the collapsing crane caused any damage to surrounding structures or property, police said.

Police said that all traffic lanes are closed on Mineola Boulevard from Harrison Avenue to Second Street because of the accident.

A Nassau County fire official said crews were responding to the scene and could not provide any immediate information.

Hospital spokeswoman Leanna Cherry said, “I can confirm there’s been an accident involving our crane,” but said details were still emerging and that she couldn’t comment further.

This is odd, based on the picture the boom retracted. Â Sometimes in cities outriggers will punch a hole through concrete because below is nothing but sewer or subway.Â 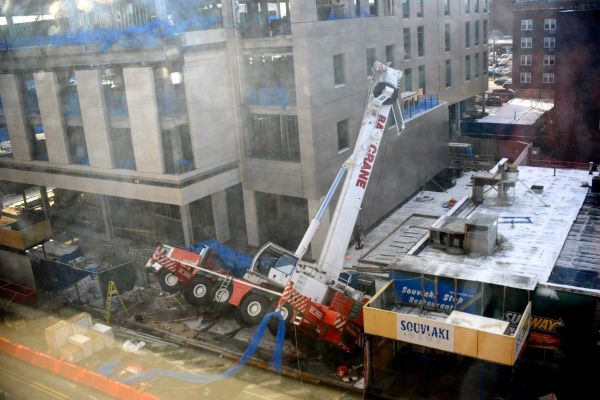 Photo credit: Lou Minutoli | Emergency responders are at the scene of a crane collapse at the construction site for a new research building at Winthrop-University Hospital in Mineola, police said. (Dec. 18, 2013)