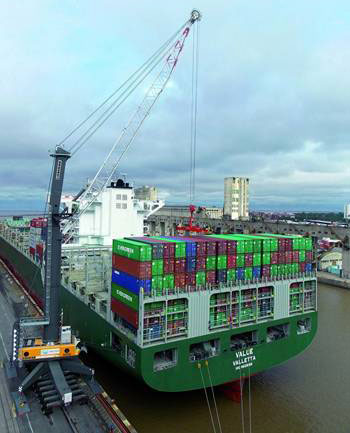 Based in Chile, Compania Portuaria Mejillones S. A. opted for their second Liebherr mobile harbor crane. The LHM 600 is based on a special design. An elongated tower extension ensures that the position of the tower cabin is higher than 37 meters. Besides better sight into the ship for the crane driver, one striking benefit is a higher fulcrum point which eases the handling of bigger vessels. All advantages come without any influence on safety or operational parameters like lifting capacity and travelling speed. The first cranes equipped with this special tower design started operation in Argentina and Uruguay in 2013. The new LHM 600 will join an existing LHM 500, delivered in 2008.

Another LHM 600 will soon add capacity in port of Arica, Chile. Terminal Puerto Arica S.A. preferred this model due to its worldwide proven high capability. The crane is configured for dedicated container handling. It is the first Liebherr mobile harbor crane for this terminal.

In Brazil, ChibatÃ£o NavegaÃ§Ã£o e ComÃ©rcio LTDA decided to enforce their port with LBS 600s. Liebherr Barge Slewing (LBS) cranes are an efficient combination of the innovative mobile harbor crane concept and a fixed pedestal mounted on a barge, which replaces the undercarriage.LBS cranes provide an economical and space-saving solution for the installation on quaysides and jetties, especially in Manaus where room for maneuvering is limited. In total, three LBS 600s will be installed in Manaus this year, where an existing fleet of nine Liebherr Fixed Cargo Cranes and six Liebherr Rubber Tyre Gantry Cranes is already in operation.

In Peru, Callao S.A. will receive two LHM 550s this year, which will significantly increase container and bulk handling throughout the port. The port has already two LHM 550s in operation since 2012. Each of these LHM 550s is equipped with Liebherrâ€™s hybrid power booster Pactronic. By adding an accumulator as a secondary energy source, Pactronic is regenerating the reverse power while lowering the load. The stored energy is transferred back to the system when the crane requires peak power during hoisting. In terms of turnover capacity, that means a plus of up to 30% and a reduction of fuel consumption in the same range, depending on operation. The hybrid drive system is virtually maintenance free as it just needs visible inspection every 10 years. 100% recyclability and less noise exposure are additional ecological benefits of this advanced system. Both new cranes are further equipped with electric drive for land-based power supply. 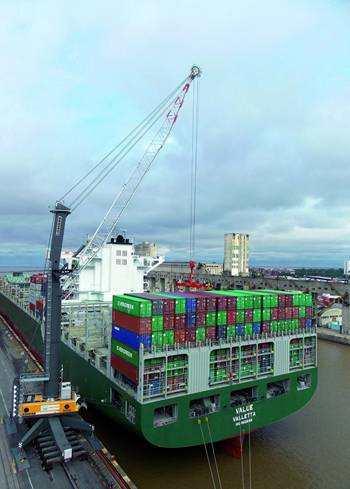