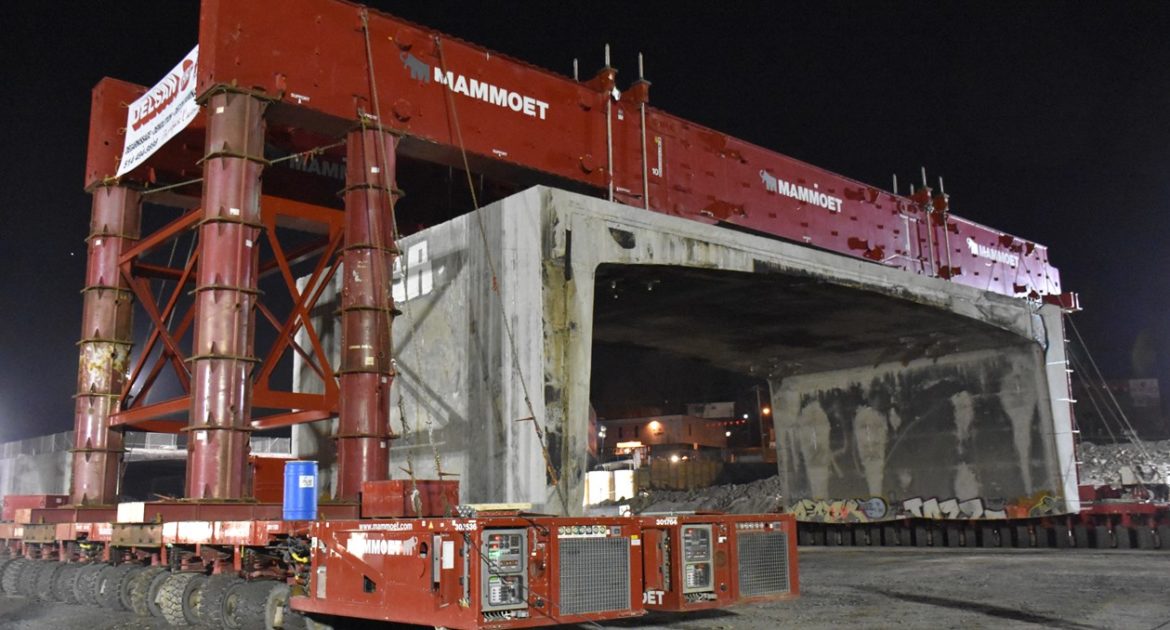 Constructed in the mid-1960s, the Turcot Interchange in Montreal, Quebec, was showing signs of wear and tear. After almost 50 years of service and daily traffic exceeding 300,000 vehicles, the busy downtown transport hub needed to be rebuilt.

The development, which is the largest in Transport Québec’s history, involved many complicated moves and couldn’t afford to disrupt any traffic. Mammoet had to remove a 10,000-ton concrete tunnel from over an active Canadian National rail line.

Removal of the old tunnel was a major priority for Transport Québec’s plans, but it also was one of the busiest sections of rail in the province. A train passes along the four rail lines on average every 10 to 15 minutes, every hour of the day. With commuters dependent on the line, particularly during the interchange’s upgrade, a lengthy rail traffic disruption was out of the question.

The Mammoet team could not risk dismantling the tunnel over the active rail line and instead tackled the tricky demolition challenge by moving the tunnel from the outside. In essence, the approach was to cut the tunnel into sections that were then bolted to a gantry and positioned on SPMTs. This effectively “picked up” the tunnel sections from the outside, making it possible to remove them without needing major machinery to be placed inside the tunnel.

For each tunnel section, one night was spent bolting it to Mammoet’s gantry on SPMTs and cutting it loose. The next night, as soon as the railway operator had given the signal, the tunnel section was driven across the rail lines and over to the laydown point for demolition.

Careful planning and uniquely customized tools enabled Mammoet to clear the tunnel in nine sections. Each 1,070-ton piece was precisely and safely removed from the railway within the allotted time. Ultimately, Mammoet’s method saved months on the demolition schedule. The tunnel structure was safely removed within 19 days, while the rail line remained active, and the largest transport construction project in Québec’s history could stay right on track.