Building in Buffalo – Roswell Crane is Up; Fourth in Downtown Area 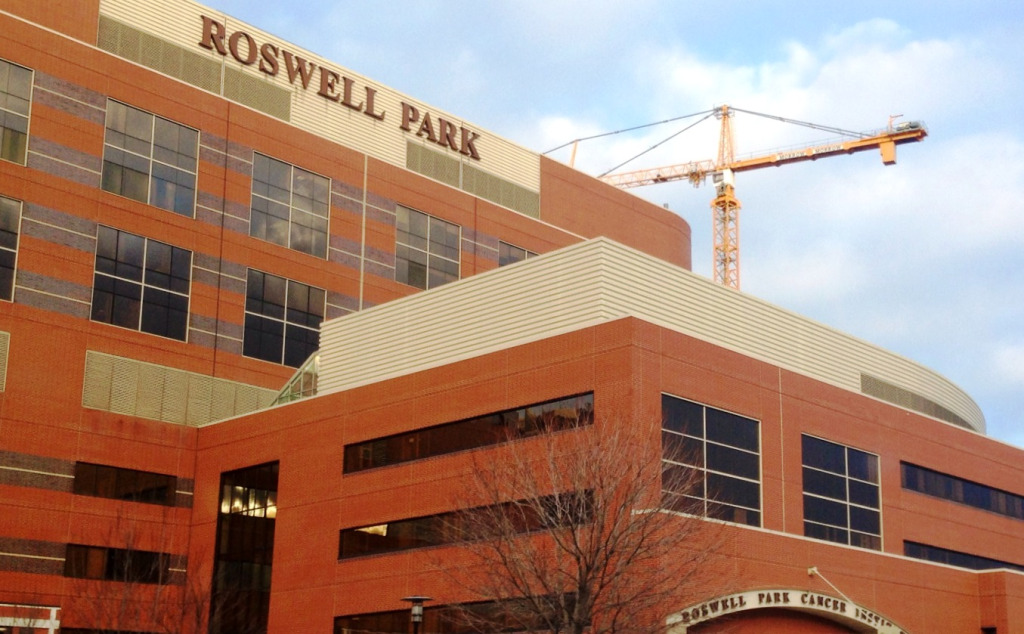 Yet another tower crane can be seen swinging its majestic steel arm around downtown.Â  Roswell Park Cancer Institute, one of the oldest and most successful cancer institutions in the country,Â is constructingÂ a 142,000 sq. ft. Clinical Sciences Center at Carlton and Michigan. 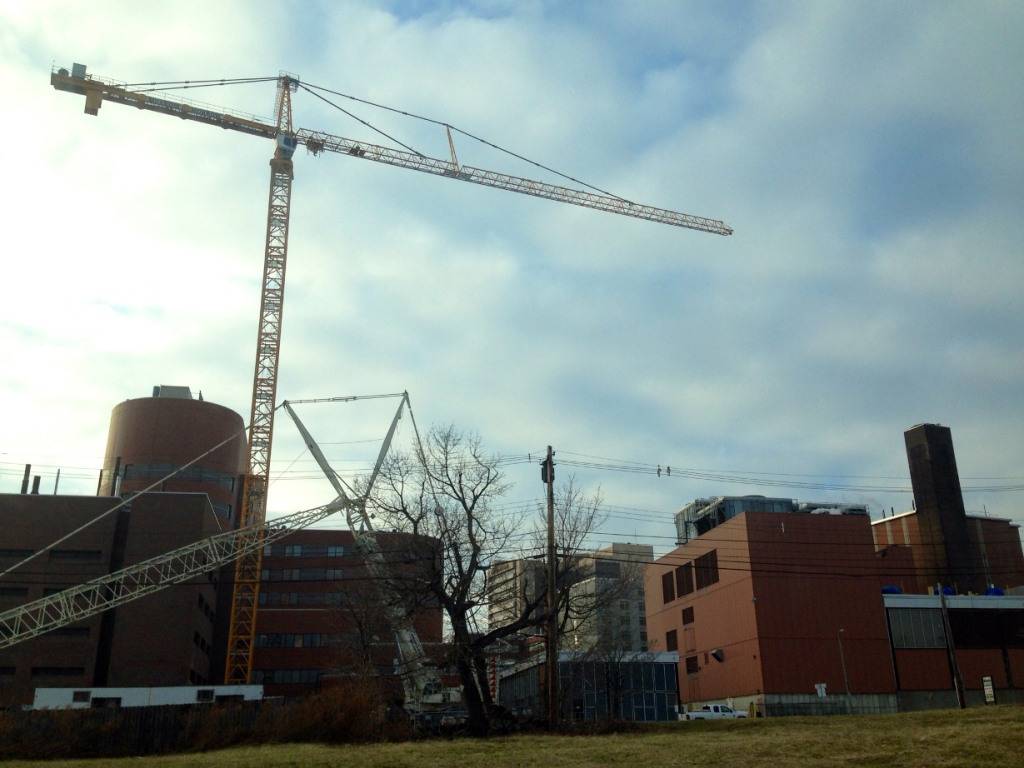 The 11 story, $40 million addition will allocate space for an expanded chemo clinic and a patient education/survivorship center, which will help serve the growing needs of Roswell Parkâ€™s 31,000 annual patients and their families. Â The Clinical Sciences Center will create 200 construction jobs and 340 long-term, full-time jobs.Â  The project is expected to be completed by Fall 2015. 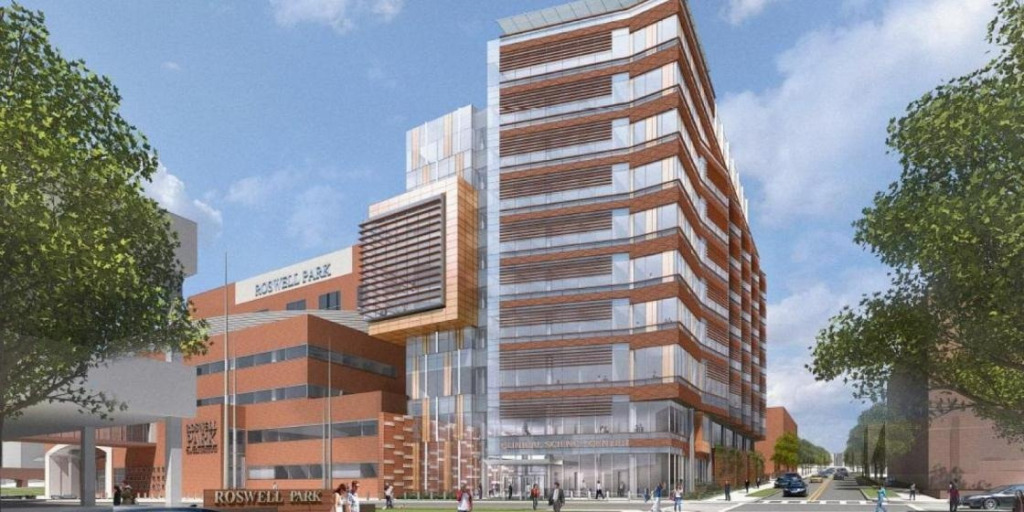 The Roswell crane kicks off yet another major development underway in the city, bringing the current number ofÂ tower cranesÂ to four within the general downtown area.

Near the Roswell site, steel is rapidly rising onÂ conventus, a facility that will encompassÂ overÂ 300,000 sq. ft. of retail, medical, and research space (below).Â  Completion is set for Spring of 2015.

2014Â will see other cranes dotting the skyline.Â Â This Spring theÂ University at Buffalo willÂ start work on their brand new Medical School at Main and High streets.Â  The $375 million, 540,000 sq. ft. complexÂ is expected to open in Fall 2016.

Directly adjacent to Conventus is where Kaleida Health will build a new, state-of-the-art Women and Childrens hospital of Buffalo.Â  The 500,000 sq. ft. giant is being designed by Shepley Bulfinch Richardson & Abbott of Boston, one of the countryâ€™s top pediatric healthcare architects.

Head a little further downtown and Uniland is preparing to start demolition and construction of 250 Delaware Avenue, a 12-story structure and parking ramp housing the global headquarters of Delaware North Companies, along with a hotel, retail, and more office space. 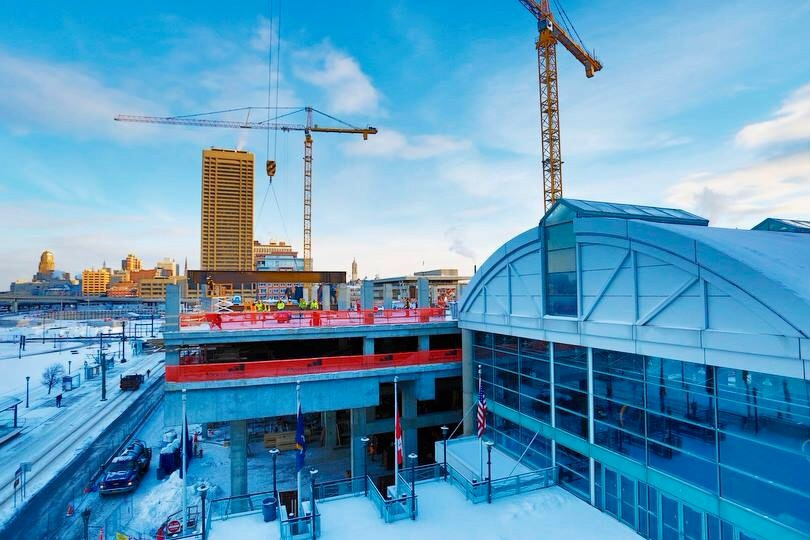 There is also potential for the start of even more new constructionÂ along theÂ waterfront as Ellicott Development hasÂ plans for â€œThe Carloâ€ to be built on the edge of the Erie Basin Marina in Waterfront Village.

Lost count?Â  There isÂ a potentialÂ for eight tower cranes in and around downtown later this year which is unprecedented for the region.

Building in Buffalo – Roswell Crane is Up; Fourth in Downtown Area was last modified: January 22nd, 2014 by Ron Selby

Woman hurt in collision with Link-Belt crane in Maine.