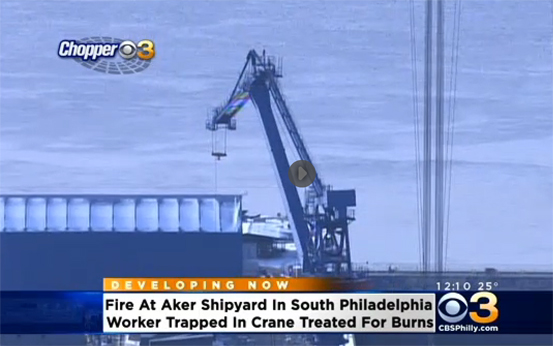 PHILADELPHIA (CBS)Â â€” One worker was burned and another was trapped following a crane fire at the Philadelphia shipyard Wednesday morning.

The fire started at about 7:30 a.m. at the Aker Shipyard in South Philadelphia.

According to investigators, a fire broke out in a goliath crane at the shipyard. Authorities say one worker suffered severe burns and was transported to the burn unit at Crozer-Chester Medical Center in an unknown condition.

Investigators say a second worker, possibly the crane operator, was trapped and rescue crews were called to the scene to remove the worker.

The fire marshal has been called to the scene to see what caused the blaze.

Stay with CBSPhilly.com for more details as they become available.