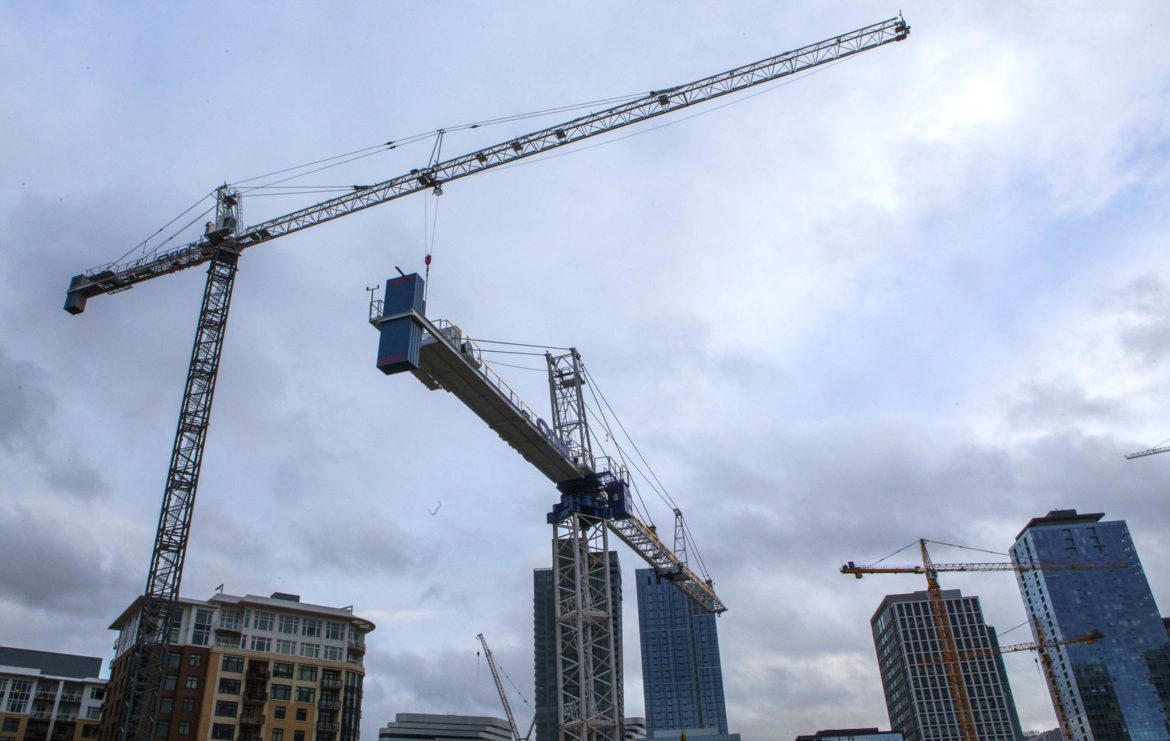 The Seattle area’s construction frenzy slowed Tuesday as crane operators and some other workers walked off the job after rejecting a new union contract.

Western Washington members of the International Union of Operating Engineers (IUOE) Local 302 started the strike at 6 a.m. Tuesday, according to a statement on its website. In addition to crane and other heavy equipment operators, the union is made up of mechanics, surveyors in the construction industry, and stationary engineers, who work in operations and maintenance in building and industrial complexes, according to the Washington State Labor Council. 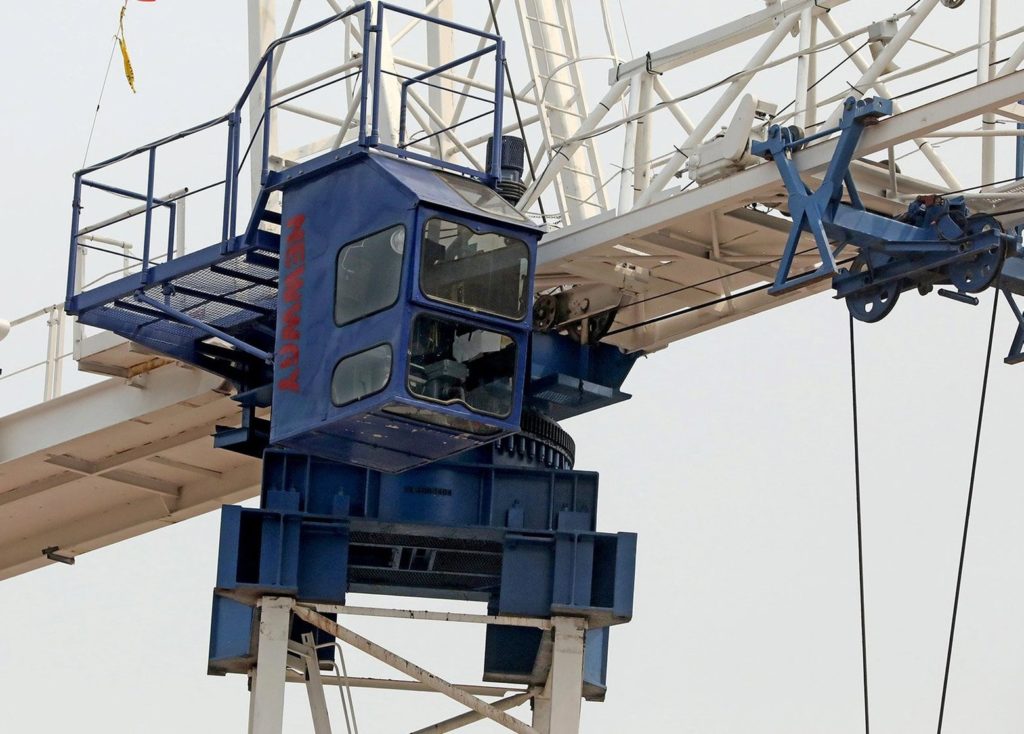 A crane sits empty at a construction site at Fairview Avenue and Denny Way in Seattle. Cranes have been idled because of strike by a union representing construction engineers and heavy equipment operators. (Greg Gilbert / The Seattle Times)

Most of the region’s construction workers aren’t covered by the contract, and some workers in other unions did show up to job sites Tuesday. But those projects throughout Western Washington faced potential delays because some of the workers involved in the strike have integral jobs.

The crane operators, in particular, are pivotal: Seattle has 65 cranes remaking its skyline — the most in the country — while Bellevue has 14. On most days, their giant arms are busy swinging around heavy equipment, but on Tuesday, most sat idle.  The cranes can cost $15,000 to $55,000 a month to rent, depending on the model.

Several projects in Seattle, from new Amazon offices to apartment high-rises, appeared to be slowed or completely shut down Tuesday. In Bellevue, city officials reported a mixed-bag: picketers blanketed some job sites, while workers at other projects managed to get some work done without cranes.

Union officials said the majority of the membership rejected the contract, but they did not return repeated calls and emails Tuesday to explain the sticking points in the stalled negotiations. In a post to the union’s website late Tuesday, business manager Daren Konopaski said only that the labor dispute was related “to our wages, hours and working conditions.” 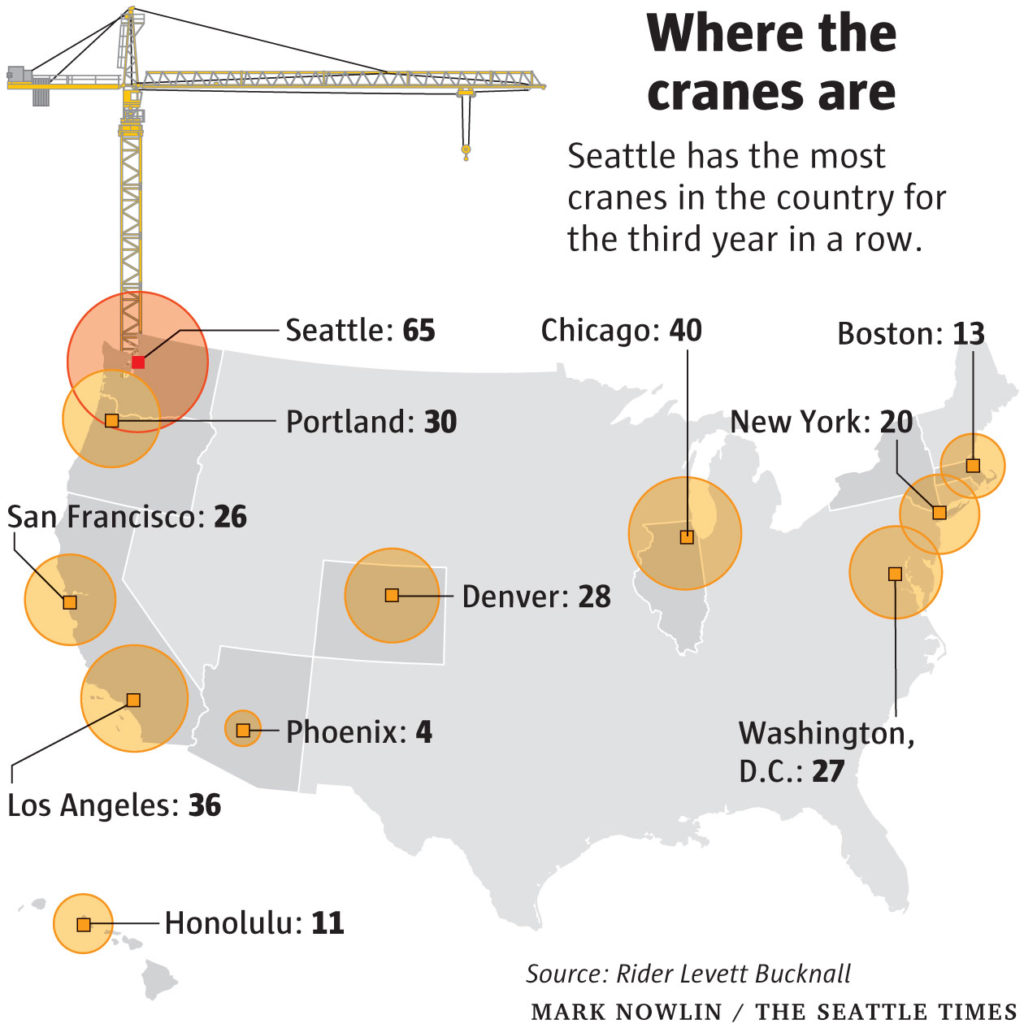 It’s also unclear how long the strike could last, but Konopaski said union members “have elected to withhold our labor and picket job sites until a more agreeable offer is presented.” There is no timetable for negotiations to resume.

The union and management — the Associated General Contractors (AGC) of Washington — have been negotiating since May. Representatives from both sides had reached tentative agreements on two occasions, but both were rejected by the workers.

The most recent tentative deal, reached earlier this month, included a 15.9 percent pay increase across the board over three years, as well as a 13 percent increase in fringe benefits such as health and welfare and pension pay. The first offer, which was rejected by nearly two-thirds of union members in July, had proposed a 14.9 percent pay bump and 9.2 percent fringe benefit increase over three years. Union workers make $37.70 to $43.13 an hour in base pay now.

“This union has been a longtime partner with us and we’re going to work with them,” said Doug Peterson, director of labor relations for the Associated General Contractors of Washington.

The contractors group added in a statement that it was disappointed that the contract was rejected but that the group was “committed to bargaining in good faith.”

Peterson noted that this particular union hasn’t gone on strike in recent memory. A year ago, local concrete truck drivers in a Teamsters union went on strike for about a week and slowed construction before reaching a new contract.

Union members were advised on Monday to observe all safety protocols but then leave as if it were their last shift.

In addition to crane operators and surveyors, the decision affects workers who pump concrete, hoist materials and lay pavers under the Washington Master Labor Agreement between Associated General Contractors of Washington and Local 302, the union said. Some union members aren’t covered by the deal, such as those working under a local project labor agreement or with Skanska.

Mike Harter, 30, a journeyman carpenter represented by a different union, said he reported to work on Tuesday at the downtown site of the new Seattle Children’s Research Institute, where a handful of colleagues were on strike. But he said their jobs are critical to the project’s momentum.

Without crane and person lift elevator operators, carpenters like him cannot work above the fifth floor because of safety regulations, he said.

Harter said he did not know the details of what is stalling the negotiations but said he supports the process and the principles.

“I can’t weigh in on whether what they are asking for is reasonable or unreasonable,” he said, “but it’s a beautiful demonstration of the free market when laborers collectively bargain, and I love the fact that they do it.”

The Lease Crutcher Lewis project manager for the Seattle Children’s Research Institute job said she could not comment on the strike. Several other contractors and developers in the city did not return messages seeking comment.

Members working under the disputed contract were being asked to report to the union’s Bothell headquarters at various times Tuesday, depending on their specific job titles, to get instructions and assignments.

“We have a longstanding relationship with the AGC and our contractors and we are hopeful a resolution will be reached soon,” Konopaski said.