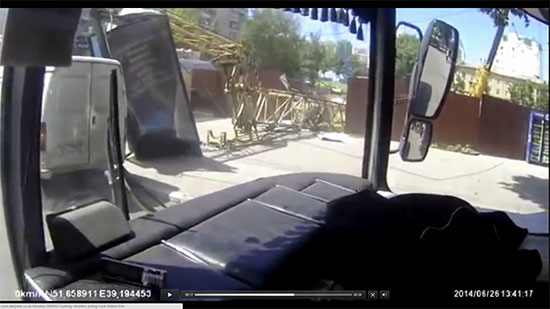 THIS IS the moment Aleksey Yakouchov dodged death by the narrowest of margins. Check out the right side of video at the 4 second mark.

Just moments after he walked along the pavement in Russia a massive crane smashed down on the spot where had been a second earlier.

“I don’t know what I did to please God on this day but he was definitely on my side,” the 32-year-old said.

The accident happened in the city ofÂ Voronezh. According to constructor worker, Vitaliy Mekhov, the crane fell because the ground sank in one place, which destabilised the machine.

He said: “The crane was resting on granite blocks but the earth subsided because of the digging nearby.

“I heard this terrible wrenching sound, like someone tearing cloth, as the whole structure began to topple. The bolts popped out of the metalwork like champagne corks and everyone just ran for their lives.”

A dashboard mounted camera on a passing vehicle captured the crane wreck for posterity.

Nobody was hurt but a traffic light near by was knocked out because the crane severed electrical cables on its journey to earth.

The construction company “OOO Complexstekhstroy” is probing the accident and it could face fines if found negligent.

Meanwhile Aleksey has consulted a lawyer and is suing the firm for stress.

“I am still shaking when I think about what might have happened,” he added.

VIDEO: Man INCHES from death as crane collapses in Russia (Must see) was last modified: July 2nd, 2014 by Ron Selby