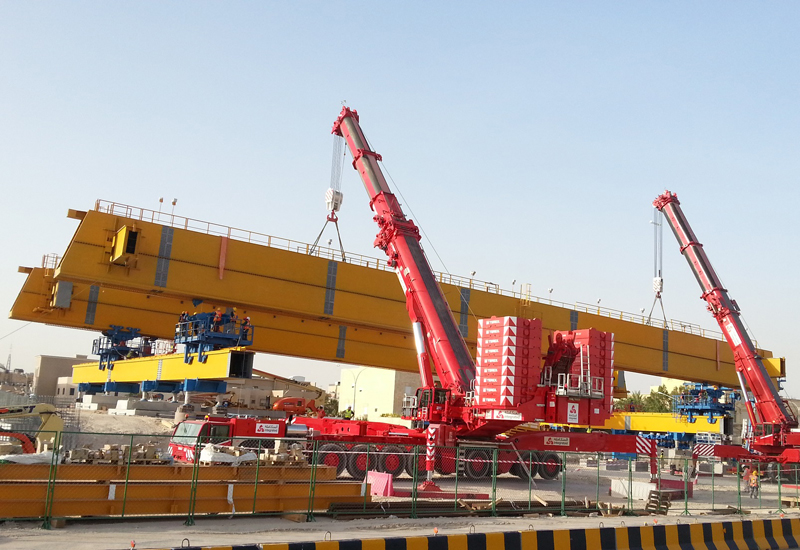 Two Terex all-terrain cranes have been used to pull off a 200-tonne girder lift in Kuwait.

TheÂ AC 1000Â and AC 500-2 models worked in tandem to place a giant supporting beam at a bridge project near to the countryâ€™s capital, Kuwait City.

The units that performed the lift belong to Integrated, the main contractor at the site.

â€œAfter studying the liftâ€™s requirements, we immediately knew that our Terex AC 1000 and AC 500-2 all-terrain cranes were the right machines for the job,â€ said Saleh Al Huwaidi, CEO of Integrated.

â€œThey have the capacity needed to safely install the beam, they are quickly driven to the jobsite, and they are very manoeuvrable,â€ he added.

Both the eight-axle AC-500-2 and the nine-axle AC 1000 were driven from Integratedâ€™s yard to the project site with their main booms installed, thus shortening crane setup time reducing costs.

Manoeuvrability was also a key consideration on the pick as both the jobsite and surrounding area were congested.

â€œOur eight-man crew was able to install the counterweight, rig the cranes, and have them ready for the lift in one day,â€ Al Huwaidi explained.

Christian Kassner, senior manager for sales and customer support atÂ Terex Cranes, commented: â€œOur counterweight design allows the same weights to be used on all our Superlift-class crawler cranes, as well as all-terrain crane models ranging from the AC 350 to the AC 1000. This reduces transportation costs and simplifies counterweight logistics.â€

Carrying half the beam load, the AC 1000 crane was rigged with 228 tonnes of counterweight and a 250-tonne hook block. The crew used 25.8m of the main boomâ€™s 50m length at a 9m working radius to pick up the 4m-tall, 2m-wide beam. For installation, the crane lifted the beam to a height of 8m at a 17m radius.

â€œEven with the weight of the beam at this radius, the AC 1000 crane was at less than 73% of safe working load,â€ explained Kassner.

The 500-tonne capacity AC 500-2, meanwhile, lifted its 102.2-tonne weight using 24m of main boom at 7.5m working radius. Equipped with 160 tonnes of counterweight, the unit hoisted the beam into position at a 12.5m radius, safely operating at less than 82% of its safe working load.

Once the crews had installed the 200-tonne bridge girder beam, they de-rigged both cranes. The units were returned to Integratedâ€™s yard within a week of leaving the jobsite.

Al Huwaidi concluded: â€œWe chose to use mobile cranes for the project since they are better for a single lift. We chose the Terex cranes because the service is excellent and reliable, and Terex provides strong technical support to our maintenance team.â€

The Terex duo lifts the beam into place at a bridge near to Kuwait City.