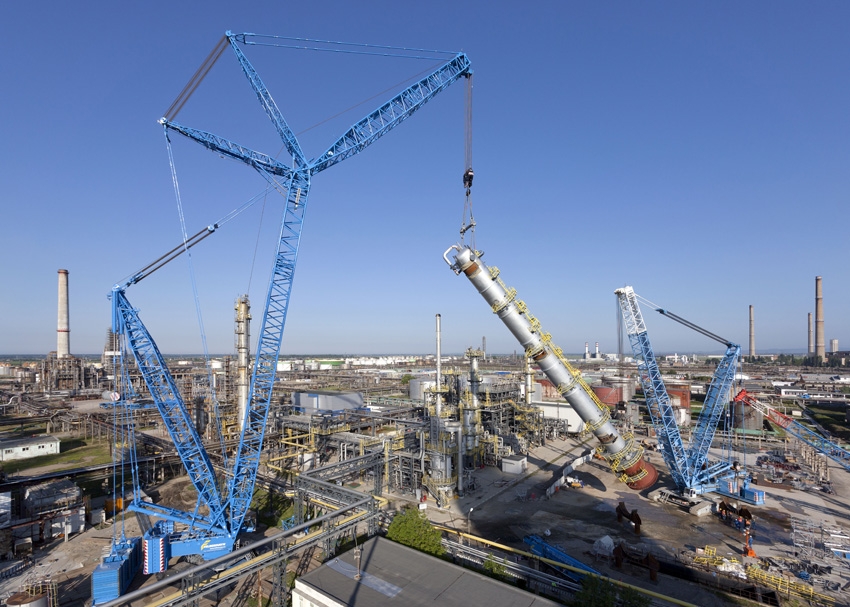 July 7 – One of the first models of the new 1000-tonne capacity Liebherr LR 11000 crawler crane has made its way to the Petrom refinery in Plojesti, where it is being used by Austrian heavy load contractor Felbermayr to hoist several steel columns into the plant.

The largest of the steel cylinders measured 58 m in length and 4 m in diameter, with a weight of 335 tonnes. The 335-tonne unit was lifted to a hook height of 80 m.

An additional LR 1750 crawler crane was used at the foot of the column to raise and control the unit.

Existing system parts in the refinery, including pipes and tanks, reduced the usage radius of the LR 11000, so that a working area of only about 35 m by 35 m was available for the crane. The erection of the lattice boom and luffing jib also proved difficult, with a 5 m wide alley having to be used for the job.

Liebherr, however, claimed that the model was “ideal for constricted conditions in refineries”.

Setup work proceeded quickly using a Liebherr LTM 1250-6.1, said the crane manufacturer. After six days, the main boom of the LR11000 with a 36 m luffing jib and derrick boom was erected, with a counterweight of over 700 tonnes.

“For its hoisting capacity the crane is incredibly compact,” said crane driverStephan Kraus.

“The alternative crane that could have hoisted this component would have been aÂ TerexÂ CC 6800,” explained project plannerÂ Klaus Rubland. “But there was definitely not enough space for it. The LR 11000 was driven into the space almost by magic.”

The LR 11000 will continue to work at the Romanian plant until the end of July.