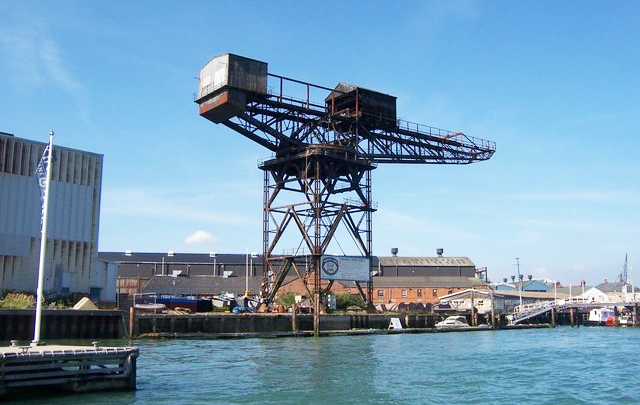 The Victorian Society has welcomed the news that repair work will begin on Cowesâ€™ historic hammerhead crane after English Heritage provided Â£76,000.

The funding will help ensure that Cowesâ€™ industrial heritage is not lost and forgotten. The craneâ€™s plight was highlighted by itsinclusion in the Victorian Societyâ€™s list of the Top Ten Most Endangered Buildings in England and Wales 2014.

Shipbuilder J.S. Whiteâ€™s 80 ton hammerhead crane â€“ installed to increase capacity for the production of naval warships â€“ epitomises Cowesâ€™ industrial past. The giant cantilever crane was built within the first decade of these cranesâ€™ development and is the only remaining pre- WWI hammerhead crane in England. Following the provision of funding from English Heritage the council now has appointed a specialist firm to carry out repairs to the crane in March 2015.Â The works are expected to take around 16 weeks to complete.

â€œThis is excellent news for Cowes. Industrial structures such as Coweâ€™s hammerhead crane must be retained for us to fully understand our history. Isle of Wight Council should continue to work with the siteâ€™s owner, the Harrison Trust, to secure the craneâ€™s long term futureâ€.

The Victorian Society remains concerned about another Isle of Wight building, the Frank James Hospital, which also previously featured on its list of Top Ten Most Endangered Buildings back in 2007. Since then the former hospital has continued to decay. The Society hopes that the Council will act on the petition of nearly 3,000 signatures presented to it by the Friend of Frank James Hospital last year and finally serve an urgent works notice on the buildingâ€™s owners.

Video of a AT crane on fire in Norway. (Massive Fire and Smoke)