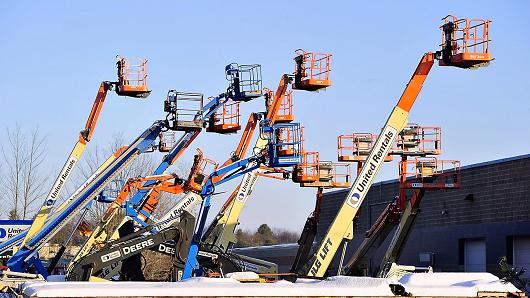 Shares of United Rentals skyrocketed 11 percent Thursday after the equipment rental company reported stronger-than-expected earnings and announced that it would buy NES Rentals.

The largest equipment rental company in the world said it would purchase NES Rentals for $965 million in cash. The Connecticut-based company said that it hopes the deal will expand its presence in Gulf states, the Midwest and the East Coast.

“The NES agreement satisfies the rigorous strategic, financial and cultural standards we set for acquisitions,” Kneeland said. “In NES, we’re acquiring a well-run operation that’s primed to benefit from our technology, infrastructure and cross-selling capabilities. We’ll be working side by side throughout the integration to capitalize on best-in-class expertise from both sides.”

The rental company also raised its 2017 outlook and said it now expects $5.95 billion in revenue. The company had previously projected fiscal 2017 revenue of $5.75 billion.

United Rental shares closed at $105.75 a share on Wednesday, before news of the acquisition or fourth quarter earnings were released.