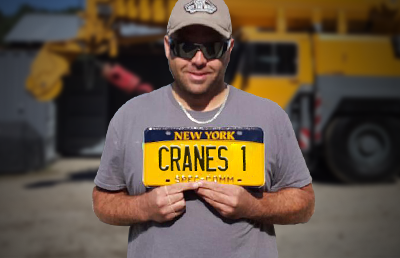 When businesses take a risk, they hope it will have a fruitful outcome. Sandel Cranes took that chance, and it proved to be more than rewarding. In 2008, Dave Sandel Jr. founded Sandel Cranes in Long Island, NY. Sandel Cranes is a crane rental business that caters to large-scale projects in need of heavy lifting including moving Trusses, Trees, Signs, HVAC Machines, Steel Beams, and Generators.

Dave boasts that he has incredible operators. We can see why because his four employees are handling some hefty machinery. Their business handles four cranes: a 34-ton, 40-ton, 70-ton, and 110-ton.

With 12 years of experience under his belt, Dave knows how much investment is needed in a rental crane business. He wanted to evolve into a better service for his steel customers and had his eyes on that 1999, 110-ton crane to make it happen.  It was a gamble, but Dave was able to obtain the impressive piece of equipment through financing. He says, “The new crane is a different type of work load,” literally.

How It All Began

Dave Sandel Jr. founded his self-named business in 2008 in Speonk, NY near Long Island. He was no stranger to the lifting game, with his roots in his father’s crane business starting in the ‘60s.

Dave took those years of experience and applied them to his current crane rental business. Sandel Cranes boasts great customer service, low rates, and quick pick-up times for their lifting jobs. According to their website they attest that they “can lift, move, place, remove, install and erect anything and everything,” and have the “lowest prices on the Island.”

Even with limitations due to the size of Long Island, Sandel Cranes is able to cater to requests 50 miles in each direction, from Nassau to Suffolk County.  Those burly lifting calls include steel erection, cellular service support, tree installation, sign erection, and construction truss jobs.

Still, Dave felt he needed to tap into a new market by taking on bigger steel jobs. That’s where the 110-ton giant comes into the picture.

The Search for Flexible Financing

Crane rental businesses demand significant capital to get these heavy duty, and just plain heavy, pieces of equipment. After seeking one alternative lender and coming up dry after two leases, Dave had to seek assistance elsewhere.

“I went shopping all over the place and was turned down repeatedly,” Sandel recalls.

The founder says the crane was a 100-percent risk due to the age, size, paperwork, and unexpected costs of obtaining it, so why bother? The collateral he already possessed was paying the bills, but he wanted more. The new crane has a further reach and can pick up bigger beams. That was the ticket.

From the crane search and negotiations, to the inspections and seller complications, Beacon Funding was there to help every step of the way. Sandel Cranes was approved for financing in April 2015 after four months of searching. Not only did Beacon finance the 110-ton crane, but also refinanced the first two cranes he gained with the alternative lender.

Dave didn’t get approved with competitors for various reasons: tougher credit, unfamiliar with the collateral (16-year-old crane), limited funds to put down, etc. Beacon introduced flexible equipment financing and gave him longer terms based on his needs, but further complications were in store.

Despite finding a superior financing option with Beacon, the process of getting the crane was no cake-walk.

First off, the crane had unexpected shipping and repairs. Because the 1999, 110-ton crane was from Germany, it was held hostage due to additional shipping costs, an unexpected $16,000. The seller included even more grief with things needing repair upon inspection of the crane. Beacon added the cost of shipping into the financing deal after the first funding was complete and helped lower the price.

Second, the German title and seller did not have import paperwork for the equipment. Sandel couldn’t register the crane without it, so he couldn’t use it for 45 days after its arrival to New York. Beacon eased Dave’s woes by pushing the first full payment out another month.

“My consultant has been awesome. He figured out how to do it all.”

The Light at the End of the Tunnel

After all the headaches, Sandel was finally able to handle bigger steel jobs with his well-deserved crane. Sandel Cranes is able to take on a whole new genre of work because of Beacon’s adaptability.

Dave had small steel jobs, but can now take on bigger projects after expanding his business with more equipment. The new crane has improved business tenfold, with the phone constantly ringing with new requests. “The steel industry is going again. It’s keeping me busy,” Sandel says.

The thing he looks forward to most after finding financing with Beacon? “I’d like to take a vacation,” he says. Sounds like a good plan, Dave.