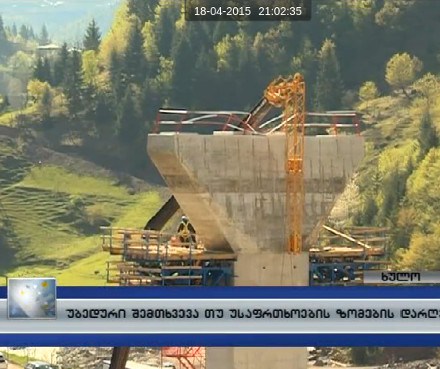 TBILISI, DFWatchâ€“Two persons died and one is in hospital with injuries after an accident at a construction site for a hydropower facility in Khulo, southwest in Georgia Friday night.

The two who died are Paata Iakobadze, a Georgian citizen, and Ahmed Chakmak, a citizen of Turkey.

Tengiz Paksadze was taken to the hospital in Batumi.

Several TV stations showed images of a crane that had buckled and was bent over a tall concrete support pillar under construction.

Witnesses said the three had fallen forty meters after the crane gave way and hit the platform they were on, near the top of the pillar.

Two of them died on the spot, while Paksadze survived with several fractured bones.

The Ministry of Internal Affairs has launched an investigation on the basis of section 240 of the Criminal Code, about violation of security rules during mining, construction or other kinds of work. The maximum penalty is five years in jail.

The developer company, Norwegian-owned Adjaristsqali Georgia, said there will be an internal investigation.

Its subcontractor, Turkish engineering company Age Batumi, promised compensation to the families of the victims.

â€œWe are concerned and we bring our condolences to the families of the dead employees. The companyâ€™s security service is studying the reasons for the accident, after which appropriate measures will be taken in order to avoid the same tragedy in the future,â€ the companyâ€™s statement reads.

AGE acknowledges responsibility for the families of the dead and injured and will pay compensation.

Ombudsman Ucha Nanuashvili called on the government to reestablish the labor inspection, which was dissolved during Saakashvili. Safety regulations are not being enforced, he told Adjara TV.

Locals from the village Didadjara, where the power station is being constructed, demonstrated on Saturday to express support to the families of the victims. There has been strong opposition to the project among locals. Many fear the installations will cause more landslides, an already major problem.