Trucks dangling off Bridge in China. Who ya gonna call? Real cranes? 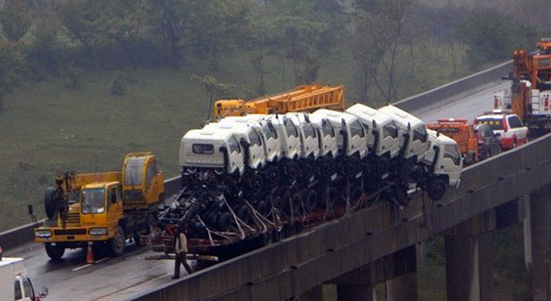 China is notorious for knocking off everything, even cranes. Â So my question is… Â Are Â Counterfeit CranesÂ coming to the rescue? Probably not. Looks like Knock off’s are reserved for export. Â So when real problems arise real cranes are brought into handle the job. Â The cranes look to be Â XCMGÂ Truck Cranes

A bizarre accident on a elevated mountain highway near the great city of Kaili in Guizhou Province. A large lorry carrying ten small trucks slipped over the wet surface of the road and hit the side of the bridge. The whole load edged forward in the direction of deep ravine. Fortunately the steel cables held and not a single white Forland truck plunged deep down. The driver and co-driver of the lorry however were less lucky, they were injured and had to be taken to a local hospital. The top of the red lorry can be seen to the right of the first Forland. The lorry somehow slipped to the left, launching the load to the front of the trailer, almost over the edge. Heavy cranes coming to the rescue. Forland is a maker of small and medium sized trucks. It is a subsidiary of Foton, which is a subsidiary ofÂ  the giant Beijing Auto Industry Corporation (BAIC). The particular Forland trucks carried on the lorry are all of theÂ type BJ1063VCJFA-1. The BJ1063VCJFA-1 is powered by a 4 liter four-cylinder diesel engine with 100hp. Trucks dangling off Bridge in China. Who ya gonna call? Real cranes? was last modified: October 24th, 2013 by Ron Selby

Account Set Up For Children Of Man Killed In Crane Accident

Do You Even Lift, Bro? [Infographic]