Do You Even Lift, Bro? [Infographic] 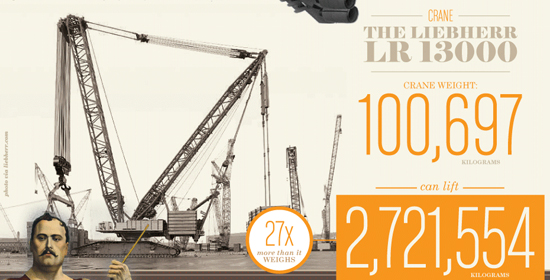 The average man weighs 88 kilograms and can squat lift 57 kilograms, making the lift ratio 0.65 of body weight. For comparison, the strongest man in the world, Å½ydrÅ«nas Savickas can lift 425 kilograms: 2.3 times his own body weight. But when it comes to who the strongest is, even Savickas is no match for these lifters.

Machines like a forklift can lift a Chevy Impala 4.27 meters before tipping over, thatâ€™s the equivalent of 1,542 kilograms. While the worlds largest forklift can hold about 100 tons. The Liebherr LR 13000 crane, one of the worlds most powerful crawler cranes, weighs 100,697 kilograms, but can lift 2,721,554 kilograms (3000-tons). The Antonov AN-225 Mriya cargo plane and the biggest plane in the world was designed by the Soviet Union in the 80s as a strategic airlift cargo aircraft. When empty, it weighs 285,763 kilograms and its maximum takeoff weight is 580,598 kilograms. Now thatâ€™s some serious lift.

Check out this infographic presented by National Pallets for more extreme lifters and donâ€™t forget to tell us what you think in the comments.
Read more atÂ http://www.business2community.com/infographics/even-lift-bro-infographic-0657478#VYhvjybcWmDvKvE8.99

Do You Even Lift, Bro? [Infographic] was last modified: October 24th, 2013 by Ron Selby

Trucks dangling off Bridge in China. Who ya gonna call? Real cranes?