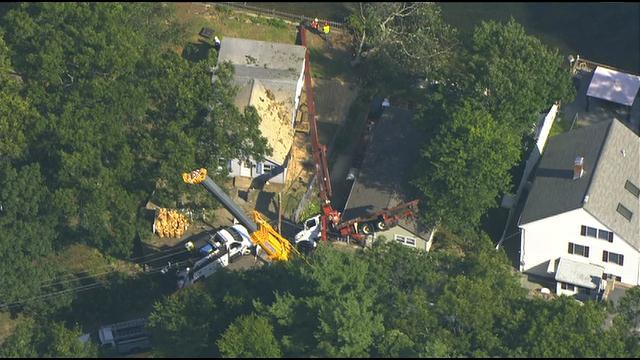 Neighbors on Lakeshore Drive say the truck was on an elevated road, which apparently gave way causing the truck to tip over around 2 p.m.

â€œI was sitting on the porch and I see this branch coming at me and the next thing I knew the gentleman sitting in the crane must have turned it just enough so that it didnâ€™t come on the porch. The next thing we saw was the crane coming down real, real slow. I didnâ€™t know that it had tipped until I came around the corner,â€ Phyllis Cain said.

Crews cut power and telephone lines to the neighborhood so they could safely right the truck without worry about ensnaring wires.

By 6 p.m. the truck had been removed although part of the boom remained on the scene.

â€œI kind of scurried to this side of the tree then watched the boom fall here by the house and then the tree fall right in front of me on this side,â€ Shane Cavanagh, one of the men working for Monkey Men Tree Removal said.

Jim Tyler, a resident of the neighborhood said tree trimming is common at this time of year in the area and has been ongoing for the past few weeks.

The truck was operated by Monkey Men Tree Removal, a company based in Marlborough. The owner of that company said he spoke with investigators and is expecting heavy fines.