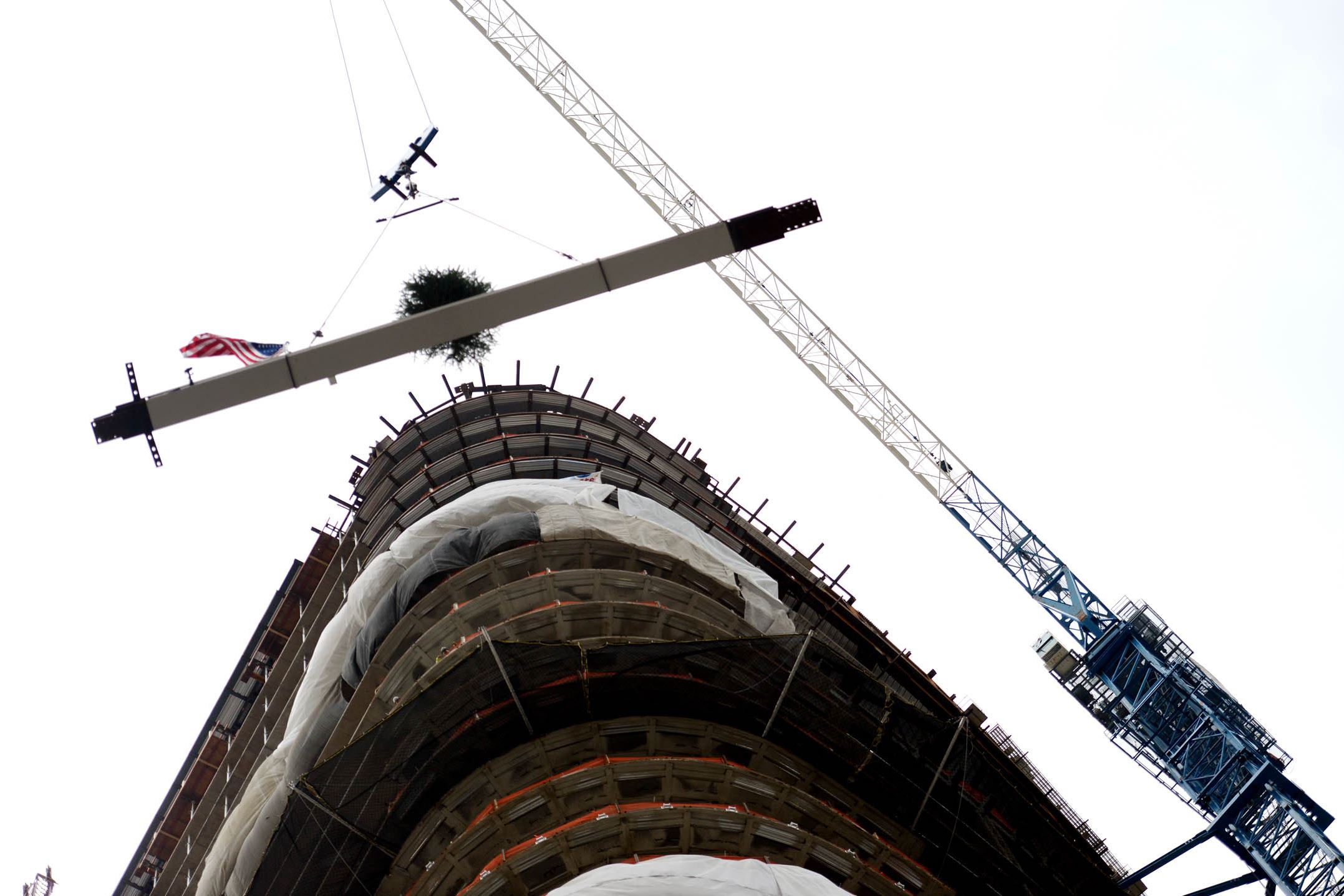 Scores of construction workers, with their hard hats on and cell phones recording the moment, watched from the ground today as the last steel beam for PNC Financial Services Group’s 33-story Tower at PNC Plaza was put into place.

The beam featured the signatures of many of the iron workers, carpenters and other tradesmen who have been working on the $400 million building, billed as the world’s greenest skyrise. Others signing the beam included officials with PNC, which intends to make the glass high-rise its new global headquarters.

Those in attendance burst into applause as the beam — trimmed with an American flag, an evergreen tree based on tradition, and a broom signifying a clean sweep with no major accidents — was hoisted by a crane to its spot at the very top of the the skyscraper.

In his remarks, William Demchak, PNC chairman, president and CEO, thanked the “incredible” men and women who have worked on the project through two harsh winters, particularly the last one, and two summers. He said the building rose to the level of his office at One PNC Plaza across the street during the winter, giving him a view of the work going on.

“I cannot tell you how impressed I’ve been with the building trades and the steel workers,” he said. “I never thought in my life that I would actually see sort of the greatness that built America right in front of my eyes. I watched it all winter long. I watched these guys through the polar vortex and frozen steel plates. They come to work when the snow is blowing straight through one side of the building and out the other. It caused me to be unproductive some days as I watched you guys worrying about you.”

In all, the project will have created about 2,500 construction jobs. It is scheduled to be completed next summer. About 2,200 PNC employees will move into the building at the end of 2015.

The office tower will feature a slew of green features, including a solar chimney that will help to ventilate and heat the building, and a double-skinned glass facade, the only one of its kind in the United States, that will allow PNC to bring fresh air inside.

An indoor park featuring greenery, comfortable seating and an outdoor patio will be available on the 28th floor.

“I think it’s fantastic for employees and terrific for Pittsburgh,” Mr. Demchak said.

Gary Saulson, PNC’s director of corporate real estate, said he expects the building to be 50 percent more energy efficient than a typical skyscraper. PNC angled the tower being built on Wood so that it could optimize the use of sunlight. It also studied pollution and pollen counts over the past 10 years to determine the best times to allow fresh air into the building. Mr. Saulson estimated it will be able to do that on 42 percent of the days during the year.

For Michael Jackson, 33, an iron worker who has been laying corrugated steel floors into the building as beams are put in place, being able to sign the beam represented a special moment.

“It’s not too often you get to build a skyscraper in Pittsburgh,” he said. “It’s nice to be part of something like this.”