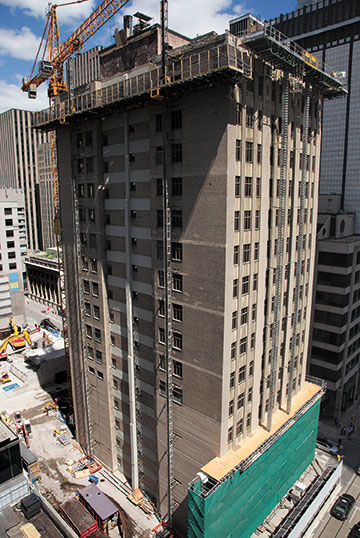 In what the demolition contractor believes is the first-of-its-kind operation in downtown Toronto and possibly in Canada, a landmark 1928 Art Deco building is being demolished exclusively by tower crane.

In a top down sequence, the historic Concourse Building at 100 Adelaide Street West is being dismantled with the use of a 12-ton KNF tower crane with a short boom to avoid contact with adjacent towers in the tightly congested area.

The building is being taken down to make way for the new 42-storeyÂ EY TowerÂ which is being built by Oxford Properties Group as part of its Richmond Adelaide Centre development.Â PCLÂ is the construction manager. 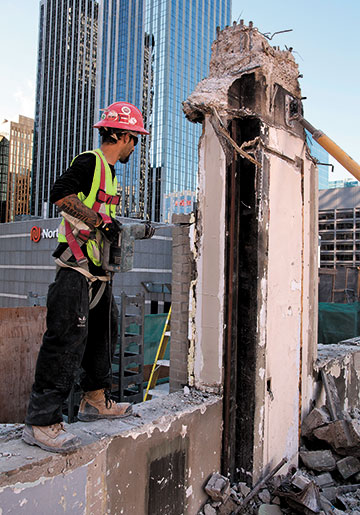 As part of the redevelopment, heritage restoration contractor Clifford Restoration is removing, salvaging, and restoring key heritage elements which will be incorporated in the east and south facades of the new tower. They include the terra cotta parapet, all the Roman stone base, an entrance archway, and two ceilings paintings by Group of Seven artist J.E.H. MacDonald.

Itâ€™s those preservation efforts which ultimately led to the decision by ProGreen Demolition, the Concord-based demolition contractor, to select the exclusive tower crane procedure.

â€œWe couldnâ€™t have done it (the demolition) otherwise,â€ says company president Paolo Provenzano, explaining there had to be a major separation between the demolition activity and the heritage retrieval work. CSE Structural Engineering is its structural consultant.

By using the tower crane and starting demolition at the top of 16-storey tower, Progreen did not jeopardize the work conducted by Clifford on the floors below, he points out.

As well, no demolition debris or material could be dumped down the elevator chutes to avoid potentially damaging or destroying the ceiling murals. Use of the tower crane eliminated that risk and also minimized the vibrations which are inherent with any demolition, he says.

Located on the north side of the building, the crane was used to lift equipment including two hydraulic pulverizing pincher machines, as well as lowering some large concrete beams â€œin their entirety.â€

The bulk of the material, however, is being removed via a haulage bin mechanism system specifically engineered by ProGreen for the project. After one full bin is lowered to the ground by the crane, an empty bin is lifted to the floor the demolition workers are on.

Fifty-yard bins were used for the asbestos abatement removal and the interior strip work which was conducted this past summer. (At the same time of the remediation, the contractor was also demolishing an adjacent nine-storey, free-standing parking garage.)

Fourteen-yard bins are being used to remove concrete, rubble, and other material from the structural demolition which got underway in September, he says.

All this work is being undertaken while an underground ramp service, which crosses the site to service the loading dock of another building, has remained open, says Provenzano.

â€œThis is a procedure-driven system,â€ says senior structural engineer and CSE principal George Carvajal, in an overview of the demolition procedures.

It is a system that had to be adapted to meet unforeseen complications. There was little available information about the design and the original 1922 structural drawings â€œwere severely weathered, damaged and hard to decipher due to their age.â€

Early in the project it was discovered that the six-foot-deep beams around the perimeter of the floors lacked sufficient steel reinforcement to support the demolition equipment. As a safety measure, the slabs were reinforced in four-floor segmentsâ€”in other words, whatever floor was being demolished the four floors below had to be reinforced, he explains.

Special guidelines had to be developed to increase the capacity of the joist floor structures from a 50-pounds-per-square-foot (PSF) rating to a 250 PSF allowing the placement of larger equipment on the floors. A laternal bracing system was used, says Carvajal.

Even with those complications, ProGreen has kept on schedule.

â€œWeâ€™re demolishing two and half floors a week,â€ says Provenzano, who attributes that achievement to factors such as 12-hour shifts, some Saturday work, and the tower crane. He expects the demolition to be complete in December.

Construction of the new $450-million Ernst and Young Tower will commence next year with a scheduled 2017 completion date, says Mark Cote, vice president of development for Oxford Properties.