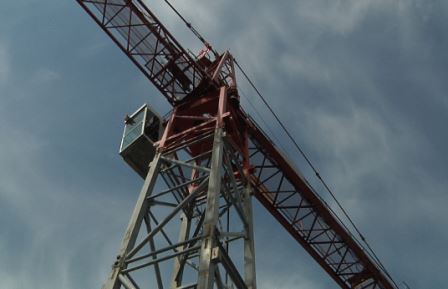 A structure weighing 650 tons is cemented into the middle of downtown–for the next 18 months.

Ben Smith brings us the story of project in downtown Bismarck that going sky-high.Â The Bismarck skyline looks a little different, and residents are beginning to notice.
Video Here
“To my knowledge this is the first time I’ve ever seen a tower crane in Bismarck” says John Miller with Capital City Construction
“Well our window we have a great view of the crane right there so we have been actually watching it “says Andrea Malucky with St. Alexius Occupational Health Services
“Right here there has been two yellow ones then there is a big tower crane by St. Alexius”
The tower crane is on 9th street next to St. Alexius medical center.
It is replacing the air handlers for the entire facility.
Now this crane behind me is unique for two reasons, unlike some of the other cranes around the city it can be raised or lowered depending on how many concrete slabs are beneath it. Â And the other reason it’s unique, is that it’s not going to be going away any time soon.
“Right now it looks to be about a year and a half total before we are finished with it.” says Johanson
This tower crane will not move the entire time, but this option is more efficent than bringing in a movable crane multiple times a week.
“It made no sense to try to shut down and schedule a weekly shutdown for 9th street”
It will also be more efficent than a portable crane.
“We can reach about 95 percent of everything we need to reach for this project…and I think it’s a good solution, I think it will work.”says Johanson
While it may slow traffic a bit
“We got some temporary detours, some lanes that are shut down…”
people dont seem to mind.
“but nothing we cant deal with.”
“It’s kind of an interesting topic and an interesting sight for people to keep a eye on.”says Malucky
“A testiment of the growth in our community and some really great projects being built here.”
These residents are happy to see their skyline change.
This remodel will change out the air handlers of St. Alexius.
It will improve the quality of oxygen for its patients while using about half the energy.
Posted:Â May 16, 2014 5:54 PM CDTUpdated:Â May 16, 2014 8:21 PM CDT
By Ben Smith -Â email