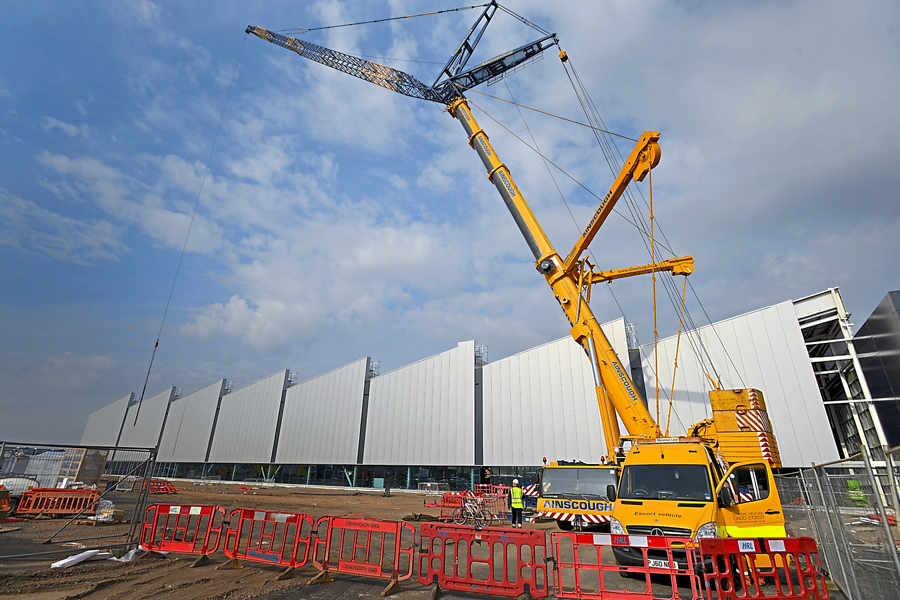 The 80m tall crane has been installed at the 220-acre site alongside the M54 by construction and support services group Interserve.

Bosses said it was a â€œcrucialâ€ part of the process and they were a step nearer handing over the plant to JLR.

This week the firm set about the mammoth task of lifting thousands of tonnes of main plant and equipment in through the main roof of the Jaguar Land Rover car assembly hall building. The materials include air handling units, cold water chillers and a high voltage sub-station.

One of only four in the country, the LTM-1500 crane was commissioned specifically for its long reach, with much of the plant having to be lifted a distance of 120m into the building.

Once opened, the building at junction two of the M54, will feature the assembly plant for the new Ingenium engine for the hotly-anticipated Jaguar XE Saloon, as well as a support area for staff featuring offices and toilet and shower facilities.

Mark Green, project manager for the firm, said: â€œThis is a crucial part of the process as it moves us a step nearer to being able to hand the plant over to JLR for them to start assembly.

â€œThe crane is an absolute beast, a real sight to behold. But it is necessary because we have to reach such a long distance into the building.â€

The next stage of the project is due to start in the middle of June when 20 enormous bay flooring slabs measuring 30m by 30m are due to be installed into the building.

â€œThis is another exciting part of the project, as the slabs we will use are steel fibre reinforced due to their sheer size,â€ added Mr Green.

â€œItâ€™s all part of the lead-up to the big moment when we get to see new engines coming off the production line.â€

The Â£500 million factory, which is expectedÂ  to eventually employ about 1,400 people, is expected to start turning out production versions of the engine early next year.

The crane at the Jaguar Land Rover i54 site