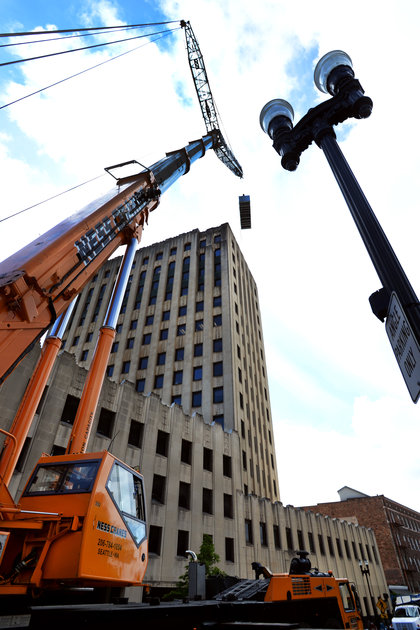 To lift something as big as an elephant, you have to rise with the birds.

Work began around 4 a.m. Saturday morning in downtown Tacoma on a project that swapped out old heating and ventilation equipment from the roof of Tacoma City Hall for a new heat recovery unit.

The new unit â€“ which weighs in at roughly 12,000 pounds â€“ is designed to increase energy efficiency in the historic building that dates from 1930.

The crane towered over the 15-story building, and was visible for blocks under blue skies. A segment of Market Street was closed to traffic as the project got underway.

A few onlookers came out to gawk.

Stephenie Kuntz brought her two kids along to watch, but after a brief observation, they returned to the family vehicle while Kuntz watched in wonder.

By 7 a.m., workers had begun taking the old equipment off the roof. It will be recycled, said city project manager Josh Clarke.

By 9:30 a.m., the crane operator was ready to begin lifting the new equipment into place. The actual process went smoothly, and the lifting took only about five minutes.

It takes about three hours to get the crane apparatus set up, and just as long to tear it down, said Gary Streitmatter, of Ness & Campbell Crane, Inc. He predicted it would be gone by Saturday evening.

Installation of the new heat recovery unit is part of a larger project that will improve City Hallâ€™s energy efficiency by about 30 percent.

â€œWe have been working with the city since 2010 to identify energy savings projects,â€ said Andrew Williamson of the McKinstry company. â€œThis project rose to the top of the list.â€

The Association of Washington Cities plans to highlight the Tacoma project at an upcoming conference. A videographer from the organization filmed the work Saturday. The goal is to encourage other cities to take advantage of the energy-efficiency grants.