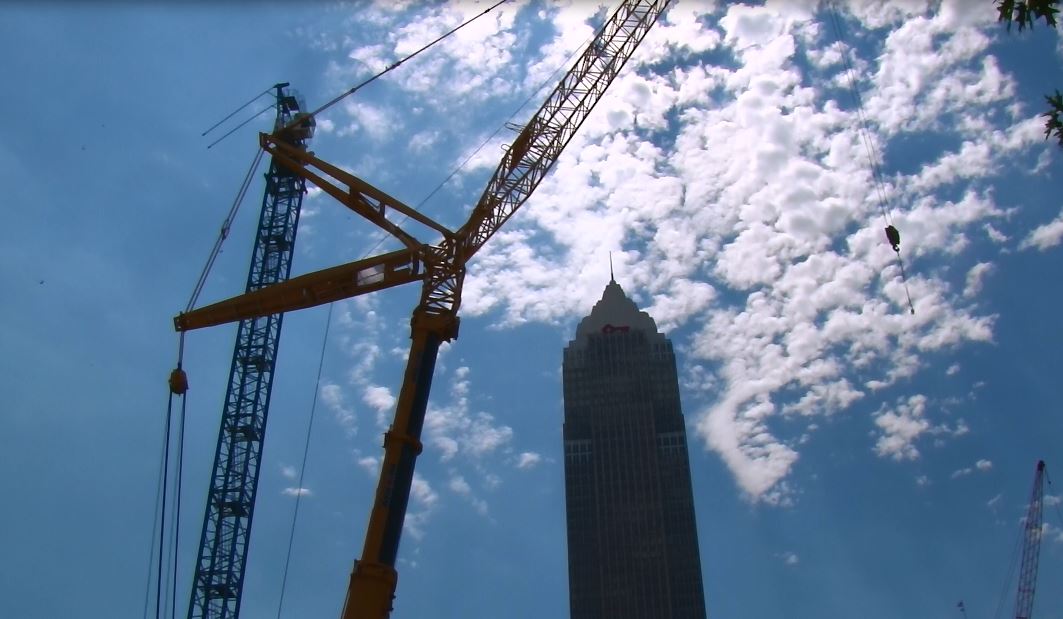 CLEVELAND, OH (WOIO) -Â The gargantuan tower crane erected on Saturday for the construction of the Hilton Cleveland/Downtown becomes operational on Monday as the city hopes to have the project complete as soon as possible.

With theÂ Republican National Convention,Â The American Bus AssociationÂ Convention,Â LeBron James returning to theÂ CavsÂ and great events like the Gay Games in Cleveland, thousand of visitors are expected to visit the city and it would be ideal to have the new hotel open in time.

Â Authorities say the tower crane is expected to run at least 10 hours a day, five days a week until late summer of 2015.
Once the hotel construction is further along, the tower crane will be extended for a higher reach over the tall building. Two extensions are expected to take place, the first sometime early 2015 and the second a few months later during spring.
The mast was constructed first. The top of the mast will be about 235 feet tall, or 220 feet above street level.
Each section is about 20 feet long and weighs approximately 10,000 pounds.
Plans call for the turntable (which weighs about 26,000 pounds) and cab (which weighs about 10,000 pounds) to be installed Friday.
On Saturday the boom, or horizontal arm, and counterweights were assembled and installed.
The crane weighs a whopping 90,000 pounds, and the boom reaches 230 feet.
The top of the boom assembly above the mast is 275 feet high, about 260 feet above street level.
Ultimately, the top of the tower crane will stand an estimated 470 feet high (about 455 feet above street level).
In the heart of downtown Cleveland, the new full-service convention center hotel is scheduled to open in 2016.
The 600-room hotel will link to both the Cleveland Convention Center and the Global Center for Health Innovation.
The hotel will also boast approximately 55,000 square feet of meeting space, a restaurant, lobby bar and recreation facilities.

Terex crane set up on hillside tips onto house