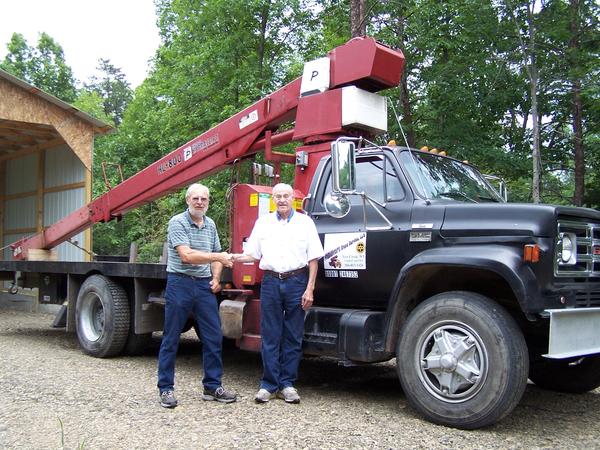 The first part of 2014 brought changes to Herb Carnell of Westernport.

In January, he sold the vehicle to David Frederick of New Creek.

Carnell, a welder by trade, ran Carnell Welding Inc. He used the crane for many lifting jobs for himself and for hire.

Carnell bought the crane in Cleveland, Ohio and drove it home with his son, Herbie.

Herb Carnell picked up steel in Allegany Quarries, which became home to the crane.

During his career, he lifted a variety of items including air conditioning units for Russ Delozier and Carl Duckworth, logs for houses, trusses and steel for numerous houses.

He worked for local sawmills, which is where he met Frederick, proud new owner of the crane.

During the exchange of ownership, Carnell recalled memories of some interesting events that involved the boom truck.

He remembered going to Philadelphia for the “We the People” parade, which marks the anniversary of the Ubited States Constitution as well as the inaugural parades in Washington, D.C. for Ronald Reagan and George W. Bush.

He helped with the set up, lifted floats and did whatever additional work was needed.

He also helped the Carpenter’s Guild with building a model of the National Edifice float, a copy of the nation’s capitol dome, while the Secret Service kept careful watch.

With the power of the crane, Herb Carnell assisted with the building of giant scales for a float that went to Richmond, Va. — named The Balance of Justice — that carried actors Dan Akroid and Chevy Chase.

When Frederick asked Herb Carnell if he had had any close calls with the boom truck, Herb Carnell recalled the “fire flying,” instance.

“I was in Ft. Ashby setting a sign and got the boom too close to a power line and saw flames shoot out of the outrigger,” Herb Carnell said.

Today, Frederick is grateful to Carnell for help with the crane business and referrals of lift jobs.

Frederick began Frederick’s Crane Service, LLC earlier this year and has been busy with his new venture, thanks to Carnell.

Frederick has been lead maintenance man for Sisler Lumber, prior to that, Kessel Lumber and is skilled at repairing and servicing large machinery.

He plans to retire from the sawmill business and start on this new path. Before the crane business, he went to Crane Edge, a school in Huntington, W. Va.

He received national certification from the National Commission Certification of Crane Operators as required by the state of W. Va.

In only a few short months of owning the boom crane, Frederick has lifted trusses, air-conditioning units, flag poles, commercial signs and poles, gun safes and even assisted with safely guiding trees to be removed near power lines.