Terex crane set up on hillside tips onto house 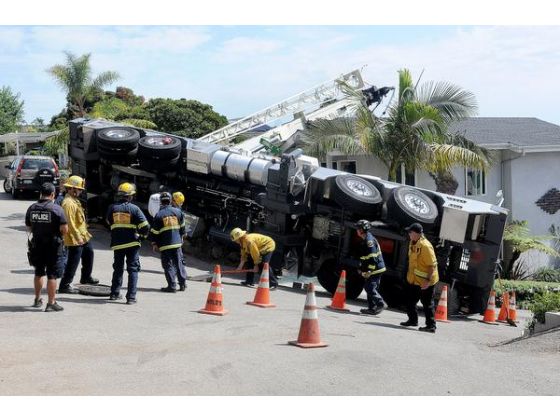 LAGUNA BEACH, Calif. (KABC) –A crane collapsed onto the roof of a Laguna Beach house Friday after it delivered materials to a neighboring home.

Authorities began receiving 911 calls at about 1 p.m. in the 2800 block of Rounsevel Terrace. Witnesses said the crane was backing up a narrow, steep road and trying to round a corner, when a rear axle lifted off the ground.

Another vehicle tried to help by tying a towline to the crane. The crane operator then raised its boom, hoping it would bring the crane back to the ground. Instead the towline snapped and the crane toppled over.

A family of five from Arizona were vacationing in the Laguna Beach home, which belongs to a relative traveling in Michigan. They witnessed the crane in trouble for about an hour before it fell over.

No one was hurt, but the family said they will need to stay at a hotel and will cut their stay short. The home was red-tagged, so no one is allowed to enter until it is inspected for safety.

Crews were on the scene working to bring the crane back up.