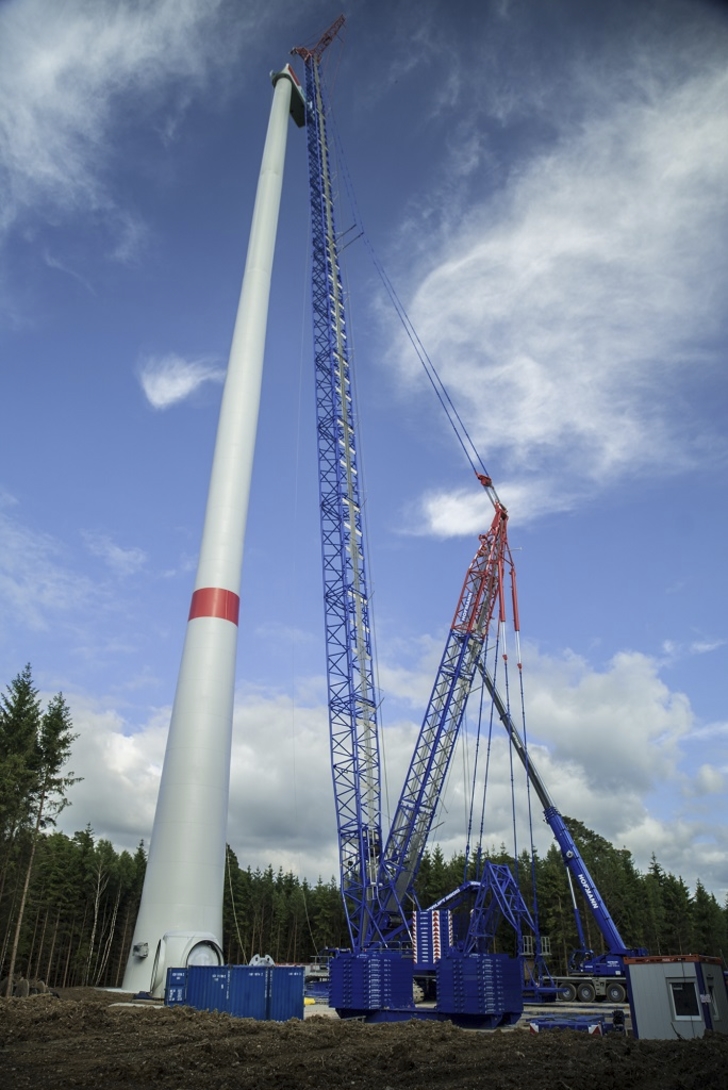 Paderborn, Germany-based crane service provider Hofmann Kran-Vermietung & Co KG Autokrane chose a Terex Superlift 3800 lattice boom crawler crane for a job to erect a 200 metre wind turbine. The Nordex turbine was close to Bickenbach, in the Hunsrück mountain range and it was erected on behalf of KS Regenerative Energie.

To reach the required hub height of 164 m, the Hofmann team rigged the crane with full Boom Booster configuration, including a Flex Frame and a split tray.

“We’d already used the Superlift 3800 to carry out several standard lifts for wind turbines with a hub height of up to 144 m, but the project in Bickenbach was the first time we had to take a crack at a total wind turbine height of 227 m,” said crane operator Christoph Bergmaier.

The Boom Booster is a welded steel wide-boom structure consisting of up to seven 12 m-long sections. When equipped with this system, Superlift 3800s can reach a maximum hook height of 174 m and lift loads of up to 80 tonnes.

To erect the large wind turbine, the crane was rigged with a 165 m main boom and 12 m LF jib. “That was the first time we ever used the complete Boom Booster system with all seven sections, which of course meant we were really excited to see how things would pan out. Not just when setting up the crane and with the split tray and Flex Frame options that we were using as well, but also during the actual work later on,” said Bergmaier.

The Flex Frame also proved helpful when setting up the crane, as the team used it to increase the superlift radius to 21 m so that it would be possible to erect the boom, with its total length of 177 m, without the need for an assist crane.

Before this, however, the team had to overcome a different challenge, namely, the relatively steep slope at the tough work site. “A boom with this kind of length needs to be kept at a perfectly horizontal position,” Bergmaier explained. This meant that the technicians first had to set up a support platform of the same length to compensate for the slope.

Once all the preparation work was complete and the crane was set up, the team made the necessary arrangements so that the Superlift 3800 would have the required working configuration.

“On top of that, we used the Flex Frame to move the working counterweight up closer to the crane at a distance of 13 m, which enabled us to comfortably manoeuvre with a minimal counterweight radius so that the tight space conditions at the work site wouldn’t get in the way,” explained Bergmaier.