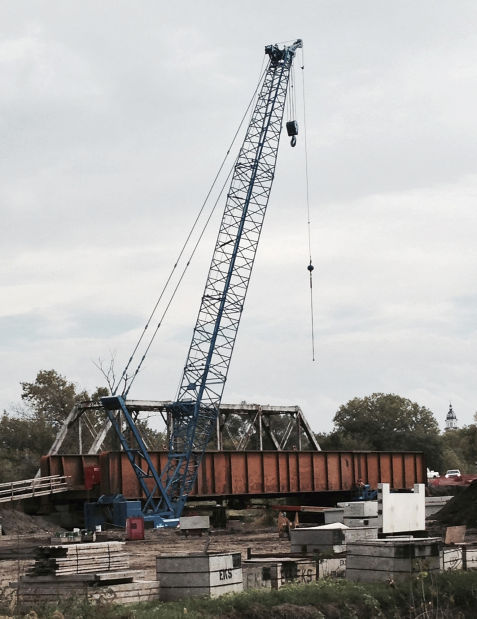 TECUMSEH — A 107-year-old historic bridge over the north fork of the Big Nemaha River on the southwest edge of Tecumseh will be dismantled soon and used for scrap metal.

The bridge was built in 1907 by the Chicago, Burlington and Quincy Railroad, said Andy Williams, spokesman for BNSF Railway.

BNSF Railway is building a plate girder span next to the old bridge with a 415-ton rating.

Williams said the old bridge is being replaced because of its age. The span is often the first thing drivers see as they drive into Tecumseh from the west on U.S. 136. The steeple of the town’s historic courthouse can be seen over the tops of trees.

The bridge replacement project began this spring with new pilings and foundations for the plate girder span. That work is being finished up now, Williams said.

On Oct. 22, BNSF Railway plans to close the railroad line for 30 hours so two cranes can be brought in to lift the historic bridge out of the way and move in the new plate girder span.

A railroad bridge built in 1907 near Tecumseh will be lifted by cranes and dismantled for scrap. BNSF Railway is replacing the old bridge with a plate girder span.