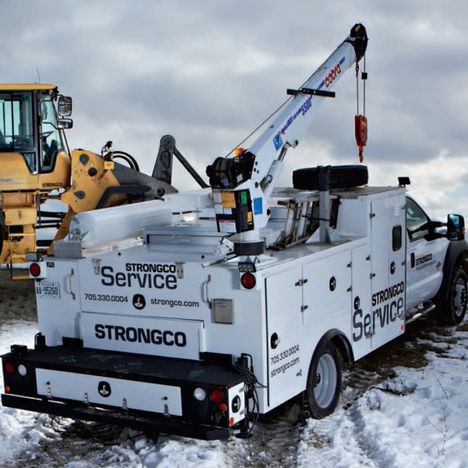 “Despite the worst winter in decades – which persisted across all of the regions in which we operate – we were pleased to achieve an overall improvement in sales across all areas of the business, extending our record of solid revenue growth through market share gains,” saidÂ Bob Dryburgh, President & CEO of Strongco. “As anticipated and in line with expectations, costs related to our branch investments and the upgraded sales organization contributed to higher expense levels. We are confident that the new branches and enhanced organization will contribute to improved earnings as the year progresses.”

â€ Â EBITDA refers to earnings before interest, income taxes, amortization of capital assets, amortization of equipment inventory on rent, and amortization of rental fleet. EBITDA is presented as a measure used by many investors to compare issuers on the basis of ability to generate cash flow from operations. EBITDA is not a measure of financial performance or earnings recognized under International Financial Reporting Standards (“IFRS”) and therefore has no standardized meaning prescribed by IFRS and may not be comparable to similar terms and measures presented by other similar issuers. The Company’s management believes that EBITDA is an important supplemental measure in evaluating the Company’s performance and in determining whether to invest in Shares. Readers of this information are cautioned that EBITDA should not be construed as an alternative to net income or loss determined in accordance with IFRS as indicators of the Company’s performance or to cash flows from operating, investing and financing activities as measures of the Company’s liquidity and cash flows.

Total revenues in the three months endedÂ March 31, 2014Â wereÂ $104.4 million, up 7% from the first quarter of 2013. Equipment sales increased by 7% from last year toÂ $64.9 million; rental revenues wereÂ $6.8 million, up slightly from 2013; and product support revenues totalledÂ $32.7 millionÂ compared toÂ $30.2 millionÂ from the same period in the prior year.

Gross margin increased byÂ $0.2 millionÂ toÂ $18.9 millionÂ during the first quarter of 2014. As a percentage of revenue, the overall gross margin was 18.1%, down from 19.2% last year. The increased revenues in the quarter contributed to higher gross margins but additional reserves for inventory anticipated to be sold at auction in the second quarter, reduced the gross margin percentage.

Administrative, distribution and selling expenses during the first quarter totalledÂ $19.8 millionÂ compared toÂ $18.9 millionÂ in 2013. Expenses were higher in the first quarter of 2014 due in large part to the investments made in 2013 in new branches inÂ Fort McMurray, AlbertaÂ andÂ Saint-Augustin-de-Desmaures, Quebec, along with additional people to support growth and better service our customers.

“Despite the prolonged winter, our branches are reporting a much improved level of sales enquiries, consistent with the feedback we received from customers during the construction equipment show held inÂ Las VegasÂ in early March,” Dryburgh added.Â  “Although the new facilities and additional people have added to our cost structure, we expect these investments to result in continued revenue growth and improved market share performance in 2014, which in turn should lead to – despite the expected flat overall market – growth in bottom-line profitability.”

Most economists are continuing to forecast modest growth forÂ CanadaÂ overall in 2014, with construction markets, by and large, expected to remain active. Growth is anticipated to be strongest inÂ Alberta, led by ongoing activity in the oil sector, and weakest inÂ QuebecÂ where activity continues to be stifled by the ongoing investigation of corruption in the construction industry by the Charbonneau Commission, as well as the suspension of infrastructure spending and increased mining royalties imposed by the previous provincial government. While varying from region to region, management anticipates that overall heavy equipment markets acrossÂ CanadaÂ will remain flat year over year in 2014.

Difficult winter weather conditions also plagued the northeasternÂ United States.Â  Despite a slow start to the year, heavy equipment markets in New England are expected to show a modest improvement in the latter part of the year as a result of a gradual recovery in the housing market.

Over the past two years, Strongco has made significant investments in new branches to expand and improve the Company’s presence in key markets. In 2012, new branches were opened inÂ Acheson, Alberta, on the outskirts ofÂ Edmonton, inÂ Baie Comeau, QuebecÂ to replace the old branch and inÂ Orillia, OntarioÂ to further penetrate the aggregates market in the area. In 2013, new branches were built inÂ Saint-Augustin-de-Desmaures, Quebec, to replace the old branch just outsideÂ Quebec City, and inÂ Fort McMurray, AlbertaÂ to better service customers in this key northernÂ AlbertaÂ market.Â  The new branch inÂ St-AugustinÂ opened inÂ December 2013Â and construction of the newÂ Fort McMurrayÂ branch was completed inÂ March 2014. At the same time investments were being made in new branches, the Company was also building and improving its sales organization with additional territory managers, customer sales representatives, product support specialists and an enhanced sales management structure, and has increased the number of skilled service technicians across all business units and regions to better service and meet customer demand. The benefits of these investments were just beginning to be realized in 2013, as evidenced by the market share gains achieved during the year as well as the increased level of product support revenues.

Early indications show that, despite the long and difficult winter, sales growth and market share improvement are continuing in 2014 and management remains optimistic regarding the outlook for the year.

Improved inventory management and debt reduction will continue to be the Company’s focus in 2014, with the goal to reduce balance sheet leverage and lower interest costs, and with the recent infrastructure improvements now in place, emphasis is being placed on further improving operating efficiencies.

This news release contains forward-looking statements that involve assumptions and estimates that may not be realized and other risks and uncertainties. These statements relate to future events or future performance and reflect management’s current expectations and assumptions which are based on information currently available to the Company’s management. The forward-looking statements include but are not limited to: (i) the ability of the Company to meet contractual obligations through cash flow generated from operations, (ii) the expectation that customer support revenues will grow following the warranty period on new machine sales and (iii) the outlook for 2014. There is significant risk that forward-looking statements will not prove to be accurate. These statements are based on a number of assumptions, including, but not limited to, continued demand for Strongco’s products and services. A number of factors could cause actual events, performance or results to differ materially from the events, performance and results discussed in the forward looking statements. The inclusion of this information should not be regarded as a representation of the Company or any other person that the anticipated results will be achieved and investors are cautioned not to place undue reliance on such information. These forward-looking statements are made as of the date of this MD&A, or as otherwise stated and the Company does not assume any obligation to update or revise them to reflect new events or circumstances.

Additional information, including the Company’s Annual Information Form, may be found on SEDAR atÂ sedar.com.