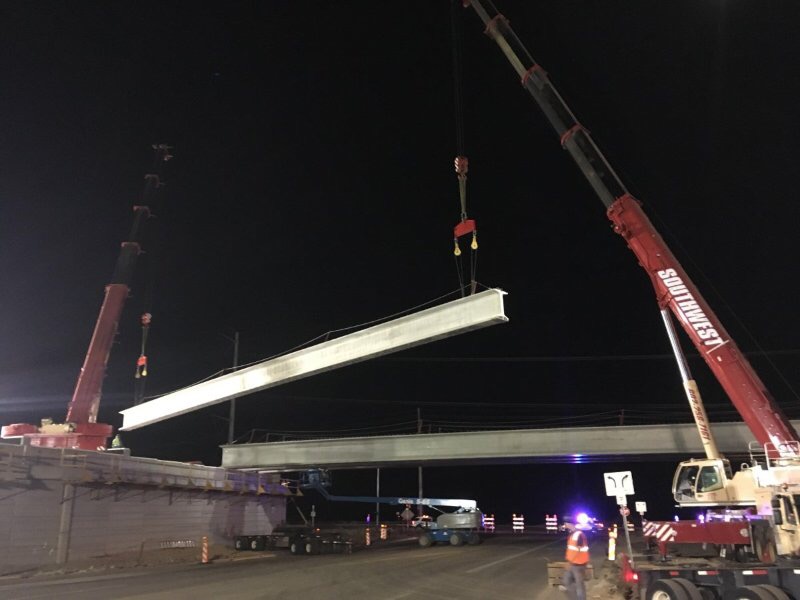 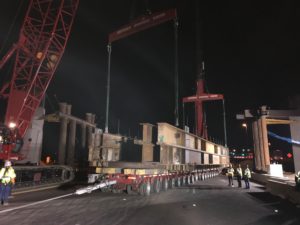 Southwest will lift more than 1,000 girders by the time the Loop 202 is completed.

In west Phoenix, major progress is being made on Loop 202 South Mountain Freeway, the largest highway project in the state’s history. The $1.77 billion Loop 202 project is the first procured under Arizona’s public-private-partnership (P3) statute, with Fluor Enterprises, Granite Construction, and Ames Construction joining together to form Connect 202 Partners LLC. The partners will provide design, construction, and 30 years of maintenance services for the Loop 202 South Mountain Freeway.

Phoenix-based Southwest Industrial Rigging is providing the cranes and hauling equipment for the P3. To date, the company has bare rented six 100-ton Tadano rough-terrain cranes, two Liebherr LR 1130 lattice-boom crawlers, two Kobelco CK2500 crawlers, and a 90,000-pound capacity straight-mast forklift. It also has four operated cranes dedicated to Loop 202. By the time the project is complete, Southwest’s cranes will have lifted 1,028 girders on more than 70 bridges.

The interchange at Interstate 10 and 59th Avenue is the latest part of the project taking shape. The first girders were placed more than six stories high for the flyover ramp that will carry South Mountain Freeway traffic to westbound I-10. The 1,565-foot-long bridge will be the longest of five flyover ramps at the interchange.

“The cranes were selected for their maneuverability,” said Doug Johnson, crane manager at Southwest Industrial Rigging. “On each bay they set, there was a long span of girders with the Grove on one end and the Tadano on the other end. Every day, the cranes would set six girders and then one of the cranes would move. The Grove would take the two weights it could walk with and pass it to the Tadano. Then the Grove would move around the Tadano, and the Tadano would hand the counterweights back to the Grove. Because they were able to do that, we didn’t have to take out the counterweight trucks. “

Johnson noted the two biggest challenges on the Loop 202 are the traffic and scheduling. “There are lane closures on I-10, which is the main hub in and out of Phoenix,” he said. “We’re working in the middle of the live traffic in the city, setting girders with cars driving next to us.”

Scheduling also keeps Southwest’s team on its toes. “We’re trying to keep with the 202 project, plus we have other work,” he said. “The 202 schedule changes, which can throw a wrench into our plans. We make it work though.”

Southwest has been working on the project since spring 2017. Once the job is over, the South Mountain Freeway will complete the Loop 202 and Loop 101 freeway system in the Valley.

Watch a video of the construction taking place.