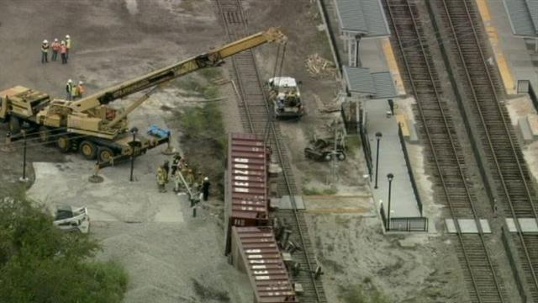 Fast action by personnel with Sims Crane & Equipment Co. helped emergency responders quickly locate the body of a railroad worker crushed in a train derailment in Sanford, Fla., Oct. 24.i

Sims Craneâ€™s Orlando, Fla.-based crane application specialist Chris Arnold said that minutes after he heard about the derailment on a radio newscast he was in touch with his Railworks Corp. client contact at the Sun Rail accident site, and offered to send a crane to lift the derailed cars back on track. 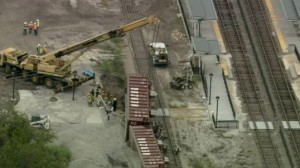 At the time he heard of the accident, Arnold did not know that a railroad employee had been crushed beneath one of the cars, which was carrying gravel, at the Sun Rail expansion construction site.

â€œWe work derailments regularly, but this was the first fatality for me,â€ Arnold said.

When given the go-ahead by his Railworks contacts to send a crane to the site, Arnold contacted two nearby Sims crane operators â€” one with a 175-ton rig in Orlando and a 110-ton rig returning from a job in South Daytona, Fla. Both cranes headed to the site and within 90 minutes from when Arnold first heard about the accident, the 110-ton rig arrived with certified crane operator Bill Leonard at the controls.

â€œWithin 30 minutes of arriving, he was set up and fully rigged for the lift,â€ Arnold said. â€œAs a safety concern, we had Florida Power & Light cut the power to the overhead lines before making the lift.â€

Leonard gently hoisted the end of the rail car â€” a lift of about 36,000 pounds â€” up and away from the spill site, and a team from the Seminole County Coronerâ€™s Office removed the body. The lift lasted 30 minutes until emergency responders could complete their investigation. In the meantime, the 175-ton rig arrived to serve as backup if needed.

â€œIt was a tragic event and our hearts go out to the family of the deceased railroad employee,â€ said Dean Sims II, vice president of marketing for Sims Crane & Equipment Co. â€œWe are gratified we were able to play even a small role in this emergency response situation as a service to our community.â€

Crane from 1860’s being restored in Pennsylvania (cool pixs)