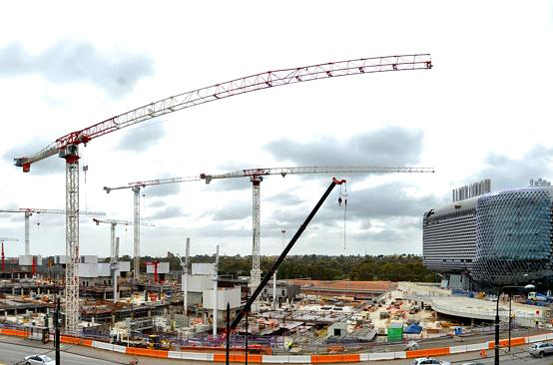 THE construction of the new Royal Adelaide Hospital has been hit by another accident after a crane malfunctioned for the second time in a month.

The crane failed just after 9pm last night as it was lowering a pile of heavy plywood, prompting it to crash into some decking.

No one was injured and it is understood it caused minor damage to the site.

Today, an official investigation was underway to determine what caused the failed safety incident – the second official inquiry on the site in the past three weeks.

A cause has yet to be determined but authorities said a “range of factors” were being investigated.

Safety inspectors will interview workers and officials on the site after builders suggested the crane may have suffered mechanical failure or computer error.

Workers suggested the crane accelerated suddenly. Sources suggested the machinery “shifted up a gear”, in the same way that occurred during another accident late last month.

Union officials claimed the site had been plagued by a series of incidents on the $1.85 billion hospital site.

Work on all eight cranes were today suspended on the site, in the city’s west. It is understood seven have been given the all-clear.

The builders of the site, Hansen Yuncken and Leighton (HYLC) and the cranes’ engineers took the decision to halt work on the crane.

During last month’s incident a crane carrying a pile of heavy timber on its “hook” suddenly shifted gears and “accelerated”, prompting it to plunge up to 6m to the ground.

No one was injured from that “out of control” crane, which damaged a handrail.

The Opposition claimed the cost of the project had blown out by up to $500million and raised concerns about the ongoing safety problems.

“There are clearly significant concerns in terms of the project management,” said Rob Lucas, the shadow health spokesman.

“Clearly worker safety cannot be jeopardised, particularly on a major like this one. It adds to the continuing saga of problems at the Royal Adelaide [site] in recent weeks.”

Following inquiries from The Advertiser today, a SafeWork SA spokeswoman said the second investigation was “ongoing”.

She added: “SafeWork SA was notified an incident involving a crane at the new Royal Adelaide Hospital site on Sunday evening.

“We are investigating the incident, and the crane is no longer at work as the site managers carry out an inspection. We have no further details as the investigation is ongoing.”

It is understood the first investigation is also ongoing.

A HYLC spokeswoman said all cranes were “most recently inspected and tested by technicians” a fortnight ago and “certified for operations”.

She added: “The new RAH project has a concentration of cranes which is unusual for the normal Adelaide experience and this requires implementation of additional technologies and work practices.

“In the interests of strict safety guidelines, HYLC has adopted a more conservative approach to

crane operations than is the usual experience in Adelaide. Safety remains paramount on this project.”

The cranes, she said, were supplied and maintained with a “leading national plant and

“As part of their contract they regularly inspect and maintain each crane,” she said.

from the crane’s manufacturer.”

The cranes will undertake an estimated 300,000 crane lifts to assemble the new hospital structure.

The project is due to be completed in 2016 with 120 more beds than the existing RAH, an emergency department that can treat an additional 24,000 patients each year and 40 supersized operating theatres.

More than 1800 people are expected on site at the peak of construction.