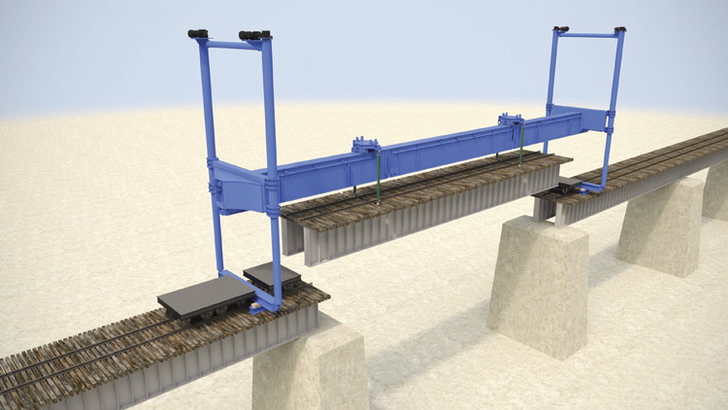 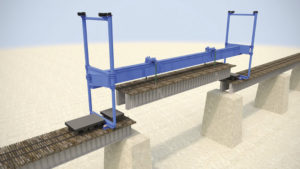 Engineered Rigging in the USA has announced a new Rapid Bridge Replacement System. It allows an old railway bridge span to be exchanged for a new one in a day.

In addition to saving time, the new 250 ton capacity system is safer than existing hydraulic cylinder methods, according to Engineered Lifting.

It comprises four 30 foot (10 metre) mechanically engaged lifting columns (a pair at each end) linked by a horizontal box beam. On that lifting girder are driven trolleys for moving the old and new bridge beams. The new system runs on the existing bridge’s rail tracks, unlike existing hydraulic systems that install below, the company said.

Assembly of the modular system can be done on a spur or siding, away from the main line, so that further reduces the amount of time the line needs to be occupied and out of action. It can be ddone in three or four shifts, according to the company, and it can be moved by road on flat bed trailers without special permits.

Commenting on the new system, Bogdan Gaita, Engineered Rigging vice president, said, “Depending on the number of spans, railroads can safely and efficiently replace a complete bridge in days rather than months.”

As a mechanical lift system it operates without wire rope winch drums, lifting strands or hydraulics. The self locking lifting columns allow synchronized lifting and are designed to have positive mechanical engagement. Stability is maintained even in the event of a power failure, the company said.