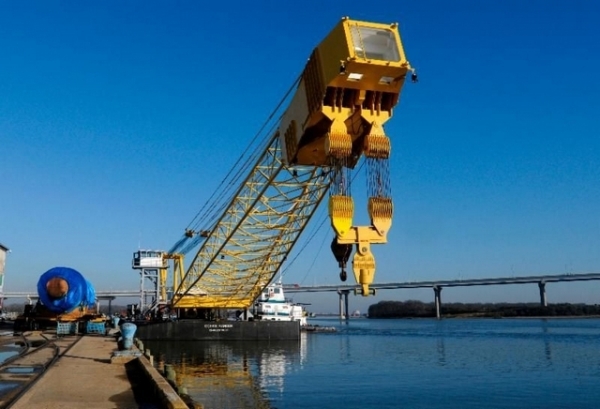 TheÂ Port of CharlestonÂ had cause for celebration earlier this month, with the arrival of a new US$2.5 million heavy-lift barge crane.

Locally produced at Metal Tradesâ€™ shipyard, Yongeâ€™s Island, the fully mobile Ocean Ranger has the capability to lift between 500 â€“ 740 tonnes. It manages this with a 162 foot long lifting broom, designed to carry items too large to be placed inside containers.

The Ocean Ranger started off strong – unloading a 308-tonne generator onto a barge at theÂ Columbus Street Terminal.

The crane will be housed on the Cooper River, near Veterans Terminal on the old Navy base in North Charleston.

The crane is owned and operated by Charleston Heavy Lift Inc., but SPA has invested $2.5 million of its own money into the machine to ensure priority access and dedicated service for the portâ€™s terminals.

Jim Newsome, State Ports Authority chief said that â€œit brings a new capability to meet the needs of our customers who transport their break-bulk and non-container project cargo across our docks.â€

the $2.5 million crane is capable of handling weights up to 740 tonnes. Image: States Port Authority