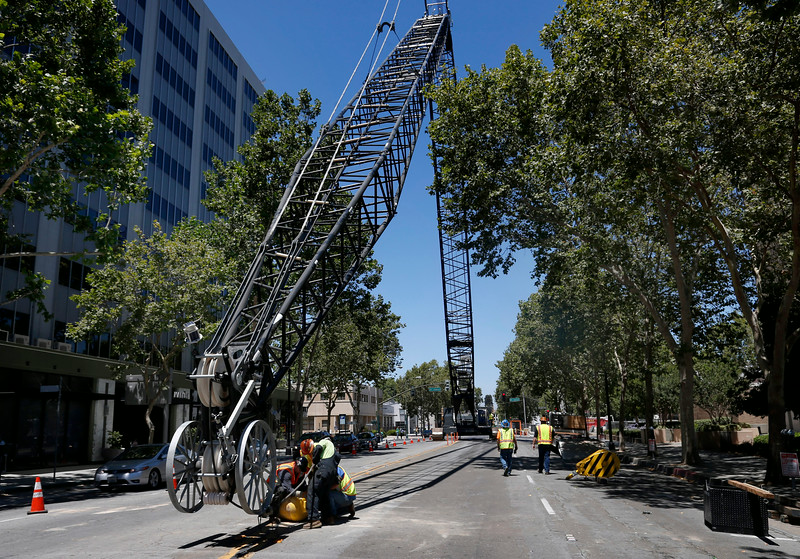 SAN JOSE — The steel skeleton of the new $230 million family courthouse will soon appear on the downtown skyline, erected by a special crane capable of hoisting the heavy girders of the blast-proof building.

Stan Alger, Vice President of Â Peninsula Crane & RiggingÂ  confirmed with Crane NetworkÂ  the crane is a “Liebherr LR 1300 with CFK Pendants.Â  It was assembled with 144â€™ of 2821 Main Boom & 204â€™ of 2316 Luffing Jib.Â  The machine is 5 years old but this is the first project for the jib.Â  After moving onto the site, it was outfitted with its full complement of counterweight.” 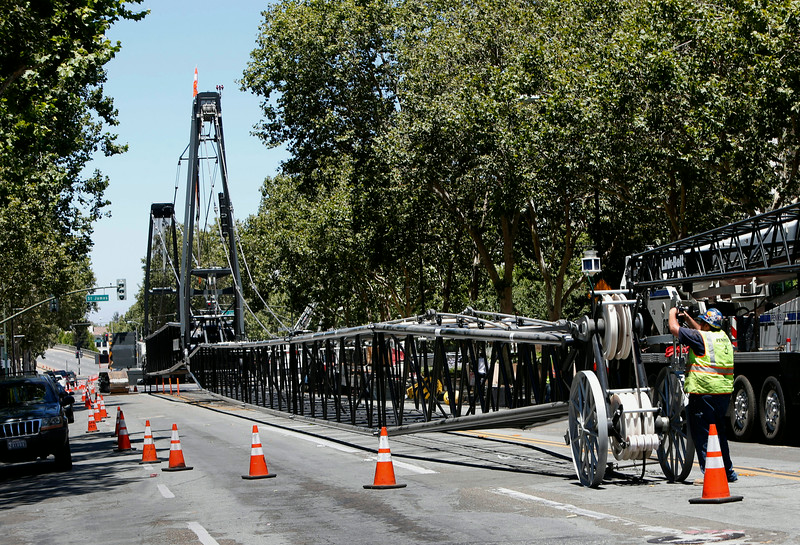 Peninsula Crane is a small, family owned business that is the Northern California supplier of choice for the steel fabricator/erector, Herrick.Â  We are currently taking delivery of a second like machine to place on another Herrick project.Â  Along with cranes, we supply rigging services to a variety of Silicon Valley businesses.

Guided by a human operator and monitored by computer, it must lift nearly 5,000 unwieldy pieces of steel — the equivalent in weight to 28 Boeing 747 airliners or 915 African elephants. The clanking and hammering as beams and columns are bolted together and then welded will be so loud that court officials are discussing a plan to shroud the windows of the nearby Downtown Courthouse in huge gray blankets — for 14 long weeks.

And the presiding judge of Santa Clara County Superior Court couldn’t be happier about it.

Wearing a white hard-hat, Walsh joined dozens of passers-by Wednesday to gawk as a crew from San Jose-based Peninsula Crane & Rigging spent more than eight hours carefully linking sections of the crane. Laid out on three closed lanes of Market Street, the black lattice-work structure stretched the length of football field, plus some.

“The result has been the emergence of Silicon Valley’s new bird, the construction crane,” Stone said, waxing poetic in a news release. “These mechanical birds are crowding the skies from San Jose to Palo Alto in the rush to build new office buildings and apartments.”

Making it all happen for the courthouse will be crane operator Chase Miller. Three generations of his family have done the job, though he’s the first to be aided in the air-conditioned cab by a computer that displays the angle of the boom, the radius of the crane and even the wind speed. The 29-year-old Vallejo resident earns $44 an hour, has about seven years experience and doesn’t take his work lightly.

“Hanging iron is a lot of responsibility,” he said. “I’ll be going back and forth at a pretty high pace, trying not to kill the guys up there.” 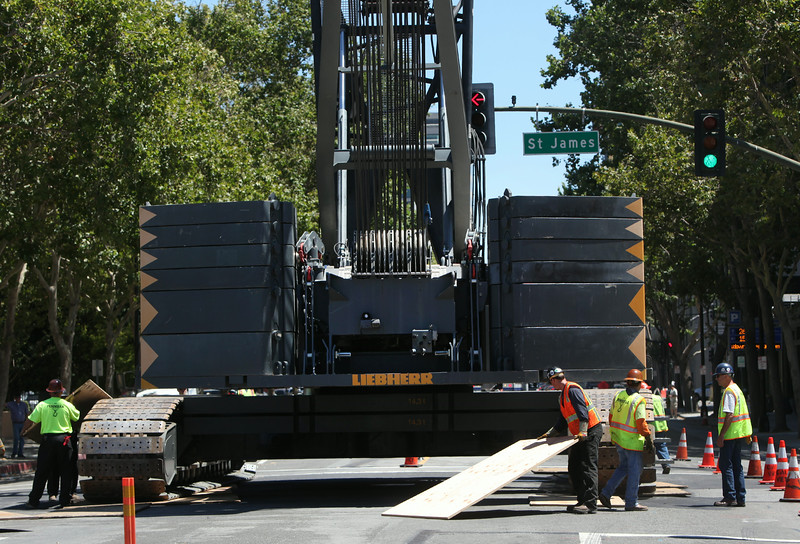 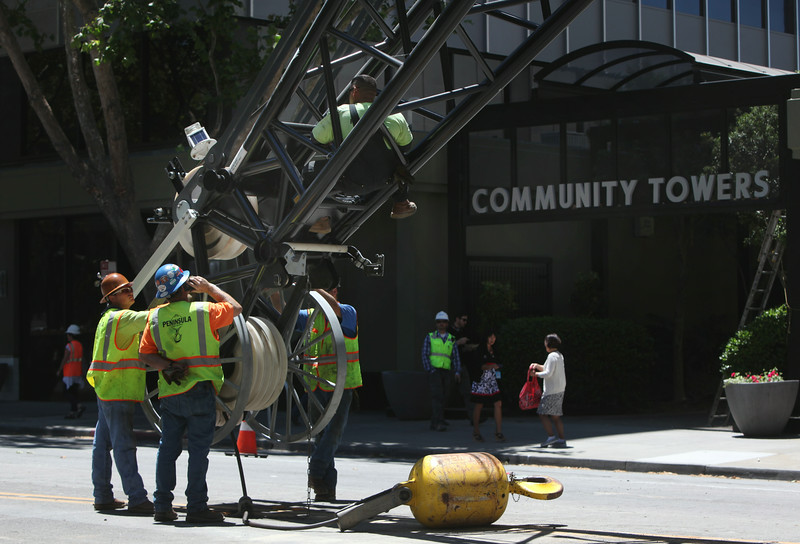 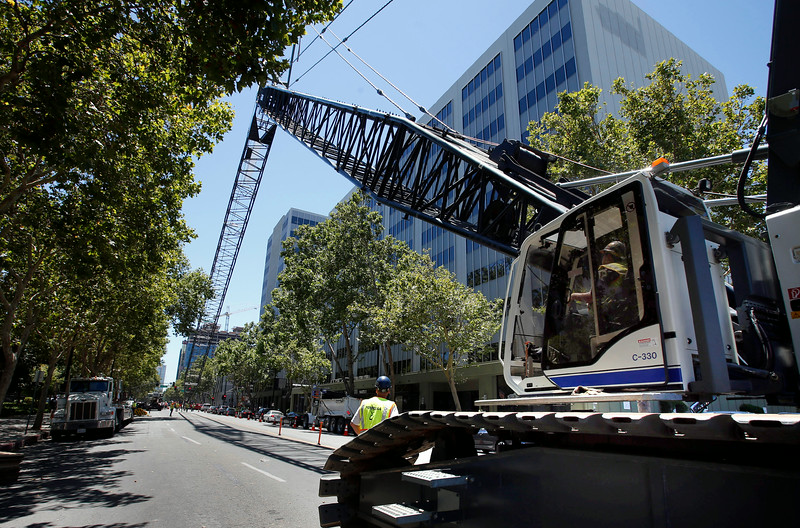 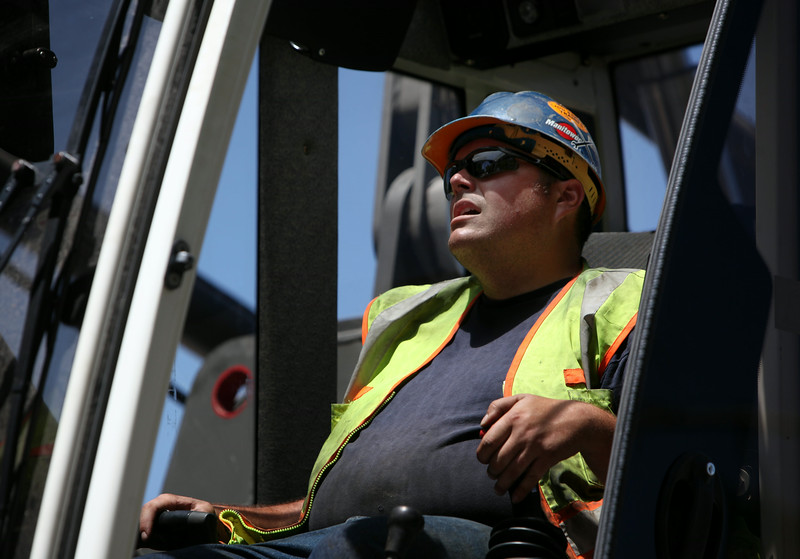 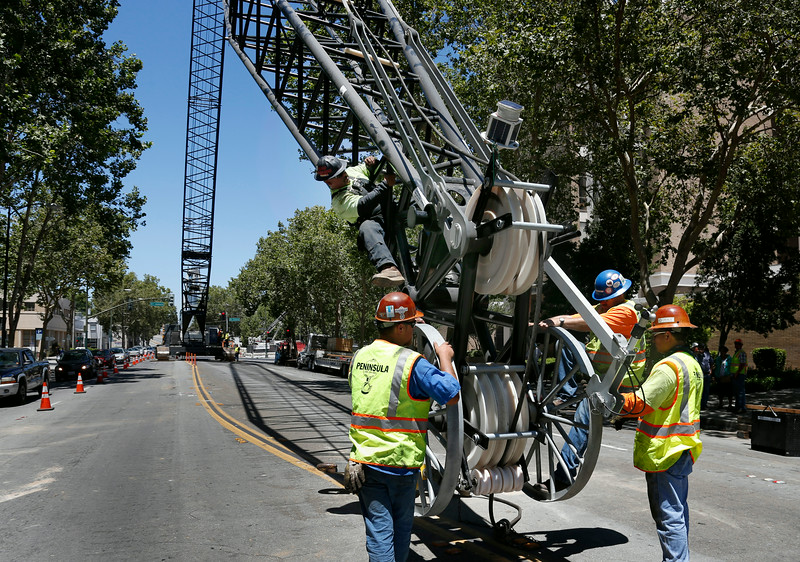 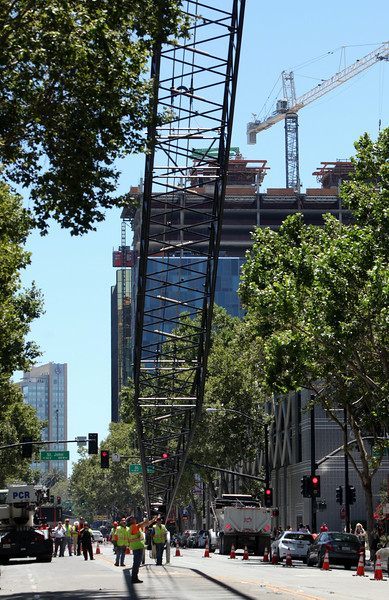 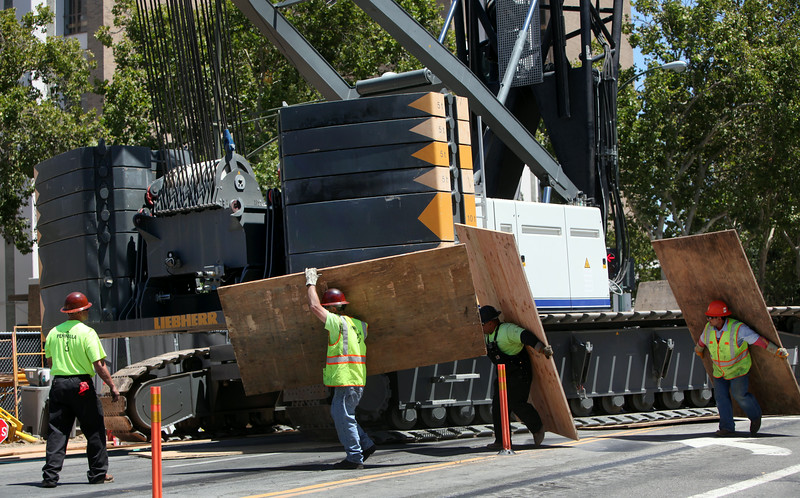