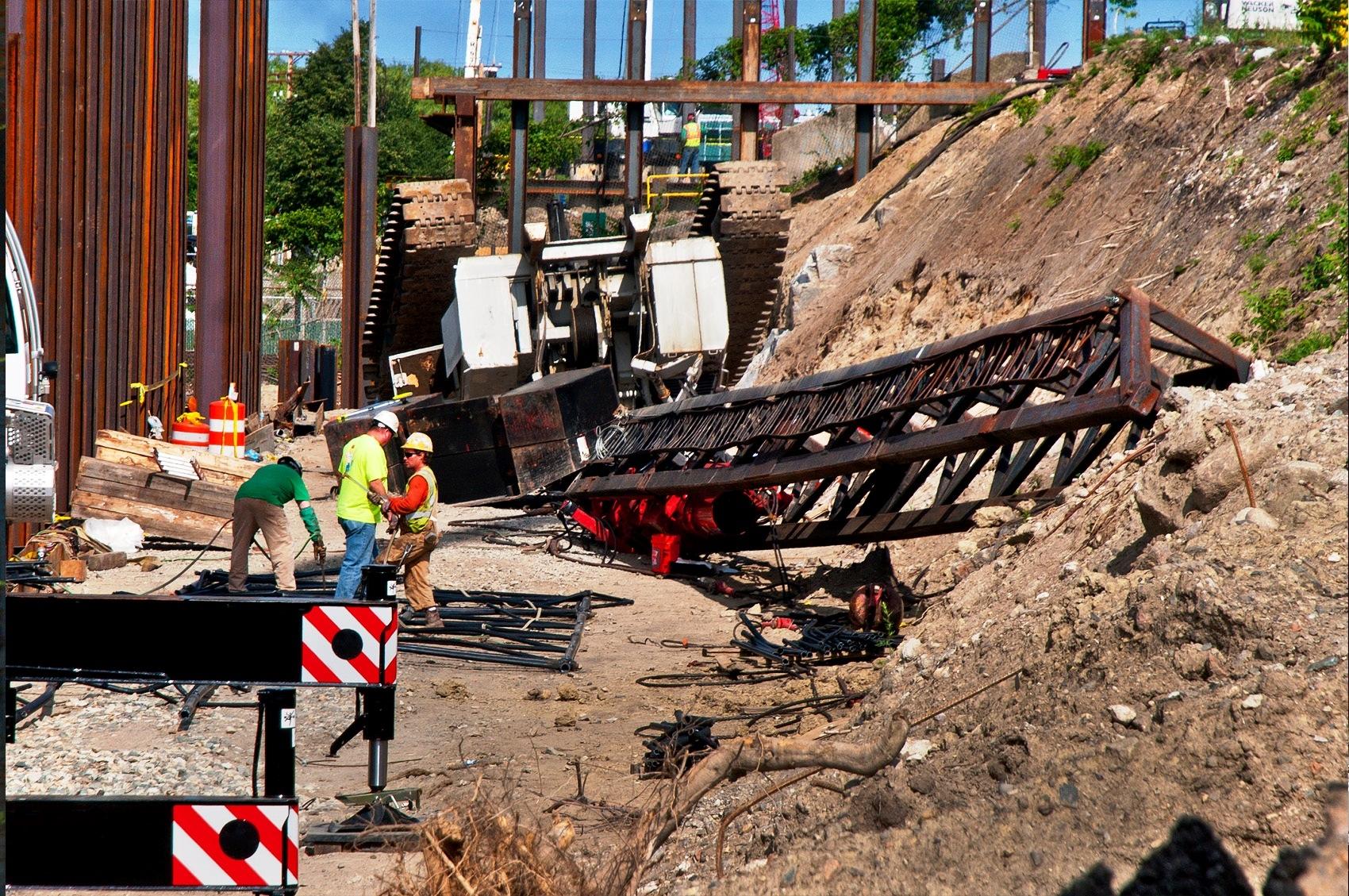 Workers continue cleaning up around a crane that toppled over on July 7 on Brainard Avenue. Photo by Greg Mirochuk

Federal investigators this week are still looking into an accident on Brainard Avenue, in North Boston suburb Medford, Massachusetts, Â after a 150-foot crane toppled onto its roof, spilling hydraulic and diesel fuel.

Ted Fitzgerald, a spokesman for the Occupational Safety and Health Administration (OSHA), said an inspector was sent to the site July 7 following the incident, which took place shortly before 4:30 p.m.

Fitzgerald said OSHA is investigating to determine what, if any, safety protocols or standards were not met by Coastal Marine Construction LLC, of Canton, the company which owns the crane.

â€œAt this point, itâ€™s too early to tell,â€ Fitzgerald said, of how long such an investigation could take.

Fitzgerald added it could be several weeks, at which time OSHA will determine what fines or further actions need to be taken.

Department of Environmental Protection spokesman Joe Ferson said the spilled hydraulic fuel and diesel from the crane was under the reportable quantity of 10 gallons. And, he added, it was all dumped into the soil.

He said DEP is still looking into exactly how much fuel was spilled, but the environmental impact was barely at the minimum.

Ferson added the company hired Clean Harbors to remove the contaminated soil from the area.

Coastal Marine Construction LLCâ€™s project manager Eugene Kelley was on site the day of the accident, but said he didnâ€™t actually see what transpired.

â€œNobody but the operator really knows what happened so it would be hard for me to comment,â€ he said.

Kelley added the company is currently in the process of investigating the accident.

The companyâ€™s owner Seana Kelley also declined to speculate about what might have happened.

However, both she and Eugene Kelley said the operator of the crane was home resting, with a broken hand, but is doing well.

Coastal Marine Construction LLC is expected to submit an incident report to the Massachusetts Department of Transportation (MassDOT), which is overseeing the replacement of the Woods Memorial Bridge on Route 16 on which the company is a subcontractor.

Grannan-Doll said the project also includes the reconstruction and widening of a 1/2-mile segment of Revere Beach Parkway and reconstruction of the signalized intersection of Riverâ€™s Edge Drive with the entrance road to the MBTA Wellington station and the interconnecting on and off ramps.

He added sidewalks within the project limits will be reconstructed and new ADA compliant access ramps provided. The existing storm water drainage system along the corridor will be replaced and new storm water outfall water quality treatment features will be constructed.

The project includes the construction of paved multi-use paths connecting to the existing and future path systems and adjacent sidewalks.

The project is being funded through MassDOTâ€™s Accelerated Bridge Program, with construction beginning November 2015 and estimated to end in 2020.